The 23-year-old, by doing so becomes the nation’s youngest ever world champion, surpassing the feat of Ike Quartey who did it at age 25. 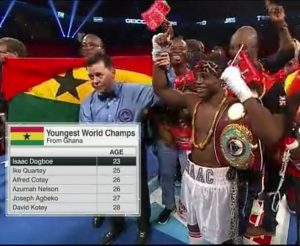 Dogboe, however, had to do it the hard way, after he was knocked down for the first time in his career in the first round of the bout, with a fantastic combination of punches from the American.

He managed to beat the count and saw off the rest of the round.

Dogboe slowly began to grow into the bout, pulling of some well-timed body shots which clearly undid his opponent.

Round 5 was certainly the round that changed the course of the bout for Dogboe. He had his man on the ropes for large portions of the round, punishing him repeatedly with agonizing body shots, before eventually knocking Magdaleno down, only for the American to beat the count.

Dogboe had now asserted his authority on the bout and it is now only a matter of time before he finished off his opponent.

In round 10, the Ghanaian continued to inflict powerful shots to the body of his American opponent who began to feel the heat.

Dogboe delivered a strong right hand which shocked Magdaleno, causing him to retreat to the corner allowing Dogboe to rush in and wear him down with a series of combination punches before the bell went. 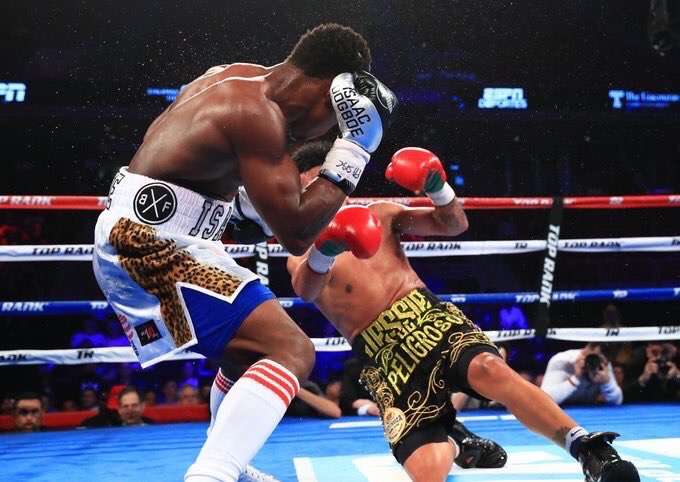 Dogboe knocks down Magdaleno in round 11

History was made in round 11, as Dogboe started the round where he had left of in the previous round. He cornered his opponent and flashed a quick combination to the body of Magdaleno which opened him up for a perfectly timed left hook to bring the American down for the second time in the bout.

This time he was done. The referee waved off the bout, causing wild cheers in the Dogboe corner.

The two boxers embraced after the bout–a real show of sportsmanship especially after the controversy surrounding the two before the bout.

Ghanaian midfielder to be prosecuted for rape in Sweden