The youngster who is gradually becoming a regular member of the Black Stars featured consistently for his side as they managed to wrestle the title from FC Zurich after a 32 year wait. 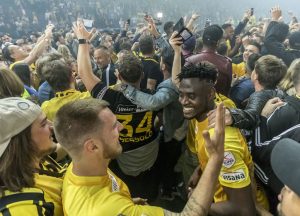 A 2 -1 win over Luzern handed them the title with four games to spare while taking their points tally to 75 for the campaign.

The budding centre back saw his numbers improve across the board from a season ago.

He played 29 matches this season,8 more than in the last and racked up 2610 minutes of total playing time while scoring twice in the process.

He took to his twitter handle to celebrate the victory with his team mates.

What a great feeling @BSC_YB
2017/18 has been Good.
League Champions🥇🏆🏆🏆🏆 pic.twitter.com/jPpqYxMI5d