Emmanuel Boateng: The journey of Levante’s masked man from Ghana

Yes, sometimes it does take a historic performance against a super power of the game like Barcelona, to etch your name in the stars among the greats.

It will be wrong for any individual to assume that Emmanuel Boateng’s hat-trick at the Estadio Ciutat De Valencia on Sunday, April 13th was a fluke neither was it the first time he was claiming the scalp of a Spanish league giant.

It is worth noting that the last player to score a hat-track against Barcelona was Diego Forlan in 2005.

Before his hat-track against Barcelona no other player in the Primera Division had even scored a brace against the league champions. 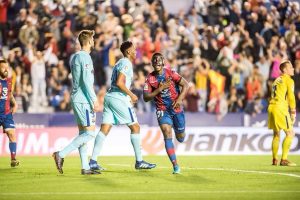 Before I get too excited it is essential to trace his progress back to where it all started.

The busy side streets of Abeka Lapaz is where it all started to take shape for the young Emmanuel, it was where he was first given the chance to have a feel of what organized football might eventually be like with local side The Gunners.

With Ghana’s colt football system gasping for breath for a good part of the last two decades he bounced around a bit before scouts of Charity Stars FC made the decision that set in motion a sequence that would forever change the life of young Boateng.

The hot and dusty pitch of the Charity Park near the Bubiashie Datus school complex would now be his new home.

Boateng, who turns 22 on May 25, started off as a center-back when he was 14, gradually carving a reputation for himself as an enforcer whom his coaches trusted enough with full back responsibilities from time to time due to his pace and capacity for bombing forward.

His golden opportunity arrived when Charity Stars established a Third Division side which needed a striker to complete the lineup.

It was then, that Chief Executive Officer of the Club Samuel Owusu Amoah bounced the idea of playing Boateng in the strikers role off the coach due to his tenacity and will to succeed.

“It came to mind one day and I told the coach let’s put Boateng in the mix going forward because he is a fighter.

“After a while we realized that he was getting goals from corner kicks and pull-outs and because of his aerial abilty we decided to keep him in the center forward’s position,” he revealed.

His positional evolution would not have been complete without the 3 month period he spent under the wing of the legendary Peter Lamptey, top goal scorer in the 1973 Ghana Premier League.

Here the principles of striking was ingrained in him at the famous Indafa Park at Mamprobi, shortly after which he emerged goal king in an invitational tournament.

The story of his journey from centre back to striker resonated with the late E.K Afranie who upon observation of the lad made calls that eventually landed Boateng in the training camp of Ghana’s U-17 team, who at the time were preparing for the 2013 AYC tournament in Morocco.

Just like every manager heading to a major competition, Head Coach of Ghana’s U-17 team at the time Paa Kwesi Fabin was on the lookout for finishers with that extra spark, Boateng had come highly recommended.

Unimpressed with his display after a few try outs, Fabin was ready to let the budding talent walk away before Deputy head coach of the team Opeele Boateng intervened.

He suggested that the youngster be given time on the premise that Boateng had shown glimpses of instincts valuable to a finisher and thus must be observed further.

He took the opportunity like a man drowning and finished as top scorer in the qualifying campaigns.

The competition in Morocco started on a disastrous note for Ghana following a 6 – 1 mauling at the hands of rivals Nigeria.

He played a bit part role in the Group Stage but failed to register a goal on the scoresheet.

Scouts were circling at this point and it seemed as if it would only be a matter of time before a larger platform was available.

A short loan spell with Tema Youth FC was followed by another loan spell with Portuguese side Rio Ave where he featured sparsely before making an onward move to Moreirense. 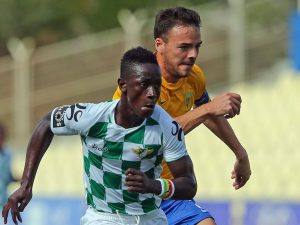 Finally the platform he had been aching for was at hand.

The time spent with the Portuguese minnows was daunting as he moved in and out of the first team while trying to find a suitable role within their system.

With the top flight status of Moreirense hanging in the balance his knack for seizing the spotlight surfaced once again as he bagged a brace against Benfica to save the team.

At this point scouts in the Spanish Primera Division had seen enough and in the summer of 2017, he sealed his move to Levante where he has scored 6 goals with one of those coming against Real Madrid early in the season.

It might seem crazy to toss this in at this point, but the honesty of the situation is that Ghana’s Black Stars have been on the try and error mill with Asamoah Gyan’s successor for quite some time now.

The good news remains that none of those that have been given the mandate have been able to own the position and that is what he must seek to do when the international friendlies against Iceland and Japan come around. 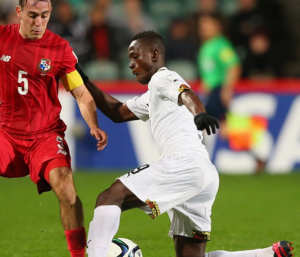 He along with the rest of Ghana’s U – 20 team that represented the nation at the 2015 World Cup in New Zealand failed to glitter but he still managed to get a goal against Panama before the Satellites eventually crashed out against the Malians in the Round of 16.

It is easy to single out his lack of standout performances whenever he has pulled on the national colours but it is also key to point out that in most of the cases he has only played a bit part role.

There is a high tendency that he has picked up valuable lessons to use as fuel along his journey that should benefit the nation.

If the positional sense, pace and composure shown against Barcelona in that 5 – 4 thriller is anything to go by, then it is safe to say that Ghana has found another with the right markings to audition for Asamoah Gyan’s giant boots.

Pass that first audition and a place in Ghana’s squad for the  Afcon 2019 qualifiers might be his.