Take cannabis or retire? That’s the dilemma for the C running back who says he needs the drug to continue playing American football.

Mike James, a 27-year-old free agent, believes he has become the first player to ask the league for permission to use cannabis, submitting a therapeutic use exemption (TUE) for the drug.

It was rejected in May because he could not indisputably prove he suffered chronic pain, but conversations with the National Football League remain ongoing and James remains hopeful of a long-term solution.

“Submitting the TUE was a huge risk. I may have sacrificed my career to do it,” the running back tells BBC Sport.

“But for me there was no running from it any more. I’m in a position to be able to do something myself, to give me back my life, and help the players in the league.”

Former NBA champion Matt Barnes told BBC Sport on Thursday that cannabis use is “widespread” in the NBA.

But what is the situation in the NFL? How did James get into using cannabis? And will his TUE ever be granted?

It was either cannabis or addiction’

James was a sixth-round pick for the Tampa Bay Buccaneers in 2013, but things turned sour for the then 22-year-old when he needed surgery for a broken ankle in his rookie season.

Then came the chronic pain and an addiction to painkillers.

“At first I was taking the recommended dose but then I ramped it up when I found ways to get extra pills,” he says.

“I fell into the culture of being on the field by any means necessary. But I was beginning to harm my real life outside of football.”

A 2011 study by Washington University found 52% of retired NFL players used painkillers during their careers, and more than 70% of those players abused those drugs.

“I never really understood the harmful nature of addiction,” adds James. “I saw my father deal with it my whole life and I thought it was a choice until I went through it myself.

“Addiction is hard, and it shouldn’t be taken lightly, but cannabis has given me an alternative.” 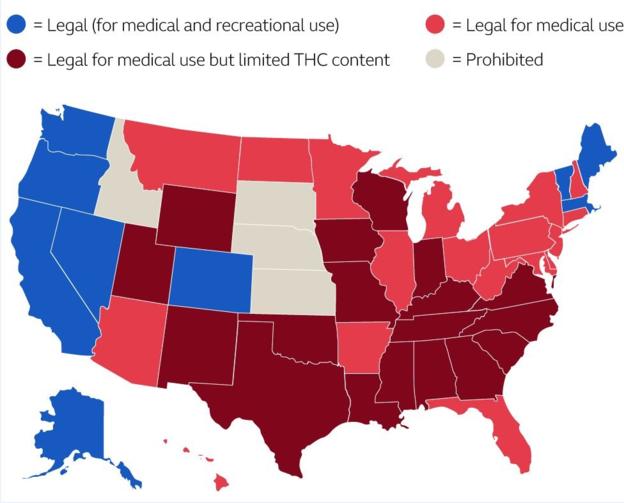 After being encouraged by his wife to use cannabis – which is legal for medicinal use in the state of Florida – James slowly began to use it in place of painkillers while continuing to play in the NFL.

He felt the benefits immediately “but didn’t want to believe it” and now the drug has now become part of his daily life.

“When I have to take breaks from cannabis, I can’t medicate. I struggle with weight, spasms, sciatic pain, joint pain, headaches and I’m not able to train,” James says.

He has twice tested positive for cannabis under the NFL’s policy and program on substances of abuse, in 2017 and 2018.

Cannabis is prohibited under the policy, which tests all players once during the year – in pre-season from 20 April to 9 August.

A positive result sees the player enter into the league’s prevention programme, as in the NBA, and the penalties increase with further violations from fines to a 10-game ban.

So James, who says he felt “pushed into a corner” by the league, decided it was time to be “open and honest” about his cannabis use.

Cannabis as pain relief – but what about the risks?

“So our position was focused on Mike being able to use medical cannabis for chronic pain syndrome.”

Dr Sisley, one of the only researchers involved in clinical trials of the drug in the US, says these include a risk of dependency and instances of psychosis, paranoia and anxiety.

But one of the conclusions of a 2017 report published by the National Academies of Sciences (NAS) said patients treated with cannabis were more likely to experience a significant reduction in pain symptoms.

How long does cannabis stay in the body after smoking?

The NFL rejected the TUE request, which James’ lawyer Brian Muraresku believes is the first application in an American sports league, but Muraresku tells BBC Sport he is hopeful of a solution.

“There was a disagreement over whether Mike had submitted enough evidence that he was suffering from chronic pain syndrome and symptoms related to traumatic brain injury,” says Muraresku.

“But Mike and I have met with the NFL since and we’re trying to come to a long-term solution in the collective bargaining agreement. I’m very optimistic.”

The NFL did not respond to BBC requests to comment on James’ TUE application and their position on cannabis.

The league is not a signatory to the World Anti-Doping Authority (Wada) code, but Wada has confirmed to the BBC that it has granted TUEs for cannabinoids in the past “where medically justified” and “where the relevant criteria have been satisfied”.

How widespread is cannabis in the NFL?

James estimates more than half of the players in the NFL are using, or have used, cannabis and says the reaction to his case has been “very empowering”.

Some have even expressed an interest in following his lead by submitting a TUE.

“I had three or four current players reach out to me immediately,” he says. “A lot of people I played with have told me to keep doing it, please keep doing what you’re doing because we all need it.”

But would the removal of cannabis from the banned list be met with widespread approval?

James says: “It’s beneficial to us as players but the question is whether it’s beneficial to the owners. Would they lose sponsorships, what about the stigma, and how would it be controlled?”

Dr Sisley, who sits on an NFL advisory board, agrees the word cannabis is “politically radioactive”.

“I’ve heard many conversations about the brand of wholesomeness and family values on the board,” she said. “They feel cannabis is the antithesis of this.”

Cannabis and concussion – what’s next?

James, his lawyer Muraresku and Dr Sisley are hoping the NFL will “set the tone” for other professional sports leagues.

But Dr Sisley believes the NFL should go one step further. She is recommending it funds a national study into the effects of cannabis not only on chronic pain syndrome but also traumatic brain injuries such as chronic traumatic encephalopathy (CTE).

In 2016, the NFL made a $100m pledge to increase research into a concussion, and Dr Sisley believes this is a perfect opportunity to look at the effects of cannabis on symptoms arising from repeated head traumas.

She says there is “promising early data” from studies looking at whether cannabis can have a protective effect on the brain.

“The NFL, rather than burying their head in the sand, could instead be proactive and acknowledge the existing science and agree to sponsor a federally legal trial.”