Suspended deputy Minister for Youth and Sports, Pius Hadzide has said that Kwasi Nyantakyi’s gestures and revelations in Anas Aremeyaw Anas’ latest investigative film were “typical of a conman.”

[contextly_sidebar id=”rT29ioUdbK0eghcWvSd8KnZu9cD0CdWT”]According to him, Kwasi Nyantakyi’s comments in the video were to urge the supposed investor to part with money for his personal use.

“I believe Kwasi Nyantakyi, typical of a conman, was running his mouth and cajoling potential victims to part with huge sums of money,” Pius Hadzide said in a Facebook comment.

The reputation and credibility of FA President Kwasi Nyantakyi has come under serious question after an investigative film by a journalist, Anas Aremeyaw Anas captured the revered sports administer on video scheming to act as an agent and at the same time President of the GFA, to sign a $15 million premier league sponsorship deal that will see the agent [him] bagging 20% of the deal value. 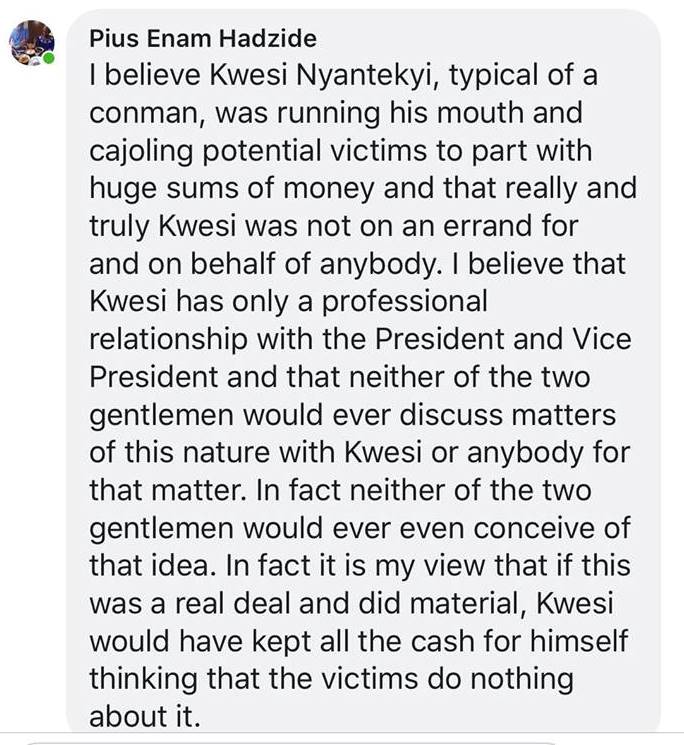 He was also captured using the name of President Akufo-Addo’s name and that of other senior officials of government to get $12 million from supposed foreign investors and sharing with them strategies for getting numerous government contracts in Ghana.

But according to Pius Hadzide, Nyantakyi was acting on his own accord, and he believes that it the deal was real and materialised, Kwesi Nyantakyi would have pocketed the huge sum and not distribute among the President, Vice President and other officials of government like he promised the supposed foreign investor.

“Kwesi was not on an errand for and on behalf of anybody. I believe that Kwesi has only a professional relationship with the President and the Vice President and that neither of the two gentlemen would ever discuss matters of this nature with Kwesi or anybody for that matter. In fact, neither of the two gentlemen would ever even conceive of that idea. In fact, it is my view that if this was a real deal, and did materialize, Kwesi would have kept all the cash for himself, thinking that the victims do nothing about it”

The Ethics Committee of FIFA on Friday said it had slapped Kwesi Nyantakyi with a temporary ban, restraining him from all football-related activities.

The chairperson of the adjudicatory chamber of the Ethics Committee has provisionally banned the President of the Ghana Football Association (GFA) and FIFA Council member, Mr Kwesi Nyantakyi, for a duration of 90 days. The duration of the ban may be extended for an additional period not exceeding 45 days. During this time, Mr Nyantakyi is banned from all football activities at both national and international level (administrative, sports or any other). The ban comes into force immediately.

The decision was taken upon the request of the chairperson of the investigatory chamber of the Ethics Committee carrying out the formal investigation proceedings into Mr Nyantakyi, pursuant to art. 83 par. 1 and art. 84 par. 2 of the FIFA Code of Ethics.

Meanwhile, the government has announced that it is taking steps to dissolve the Ghana Football Association following the revelation by Anas’ film.