Ghana’s Beach Soccer team will not participate in this year’s African Nations Cup tournament in Egypt because the Ghana Football Association failed to absorb the association as demanded by the Confederation of African Football.

Countries like Uganda, Senegal and Egypt have their beach soccer associations under their respective football associations but Ghana’s FA did not seem cooperative with the Beach Soccer Association.

Several emails were not responded to and a lack of action has now cost the nation a place in the continent’s biggest gathering in beach soccer.

Yaw Ampofo-Ankrah, President of Ghana’s Beach Soccer Association, told Citi Sports on Sunday that not going to Egypt constituted a low point for the association.

“We (Ghana) applied to the Ghana FA for the affiliation and it was about the 4th time we were making such an attempt. Communication is sent from CAF to all the football associations and that is further sent to the bodies in charge of beach soccer.

Unfortunately, there was no response from the GFA to CAF and so, after a few emails, we were copied in the communication. The competitions division of CAF contacted us and we had to do the leg work and go to the FA.

We put in a last-ditch SOS to the Sports Ministry but that could not help and so, the communique came from CAF that it was too late for us and thus, we would not able to take part in the Beach Soccer African Cup of Nations.” 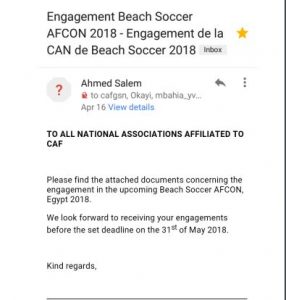 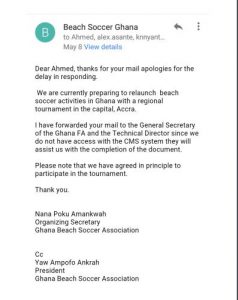 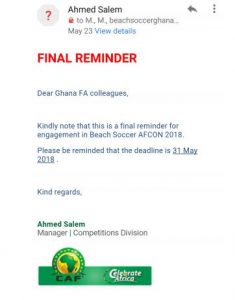