Asante Kotoko have spoken out in the aftermath of the Anas Aremeyaw Anas exposé and they say they are very unhappy at the journalist for his part in their 1-0 loss to Hearts of Oak in 2017 during the Ghana Premier League.

The club’s anger is premised on the fact that Anas and his Tiger Eye team, in the course of their work, paid monies to match referee Samuel Sukah, to influence the outcome of the match played at the Accra Sports Stadium.

Sukah awarded a penalty to Hearts in the 82nd minute of the game for what he deemed as  handball on the part of Kotoko defender, Ahmed Adams. Vincent Atingah scored the ensuing penalty for Hearts to win.

The investigative team was working on exposing corruption in Ghana Football and thus, wanted to see if they could have a say in how the nation’s biggest club match played out on the pitch.

Kotoko’s grievances were highlighted in a statement signed by its Executive Chairman, Dr. Kwame Kyei, which was put out on Wednesday. 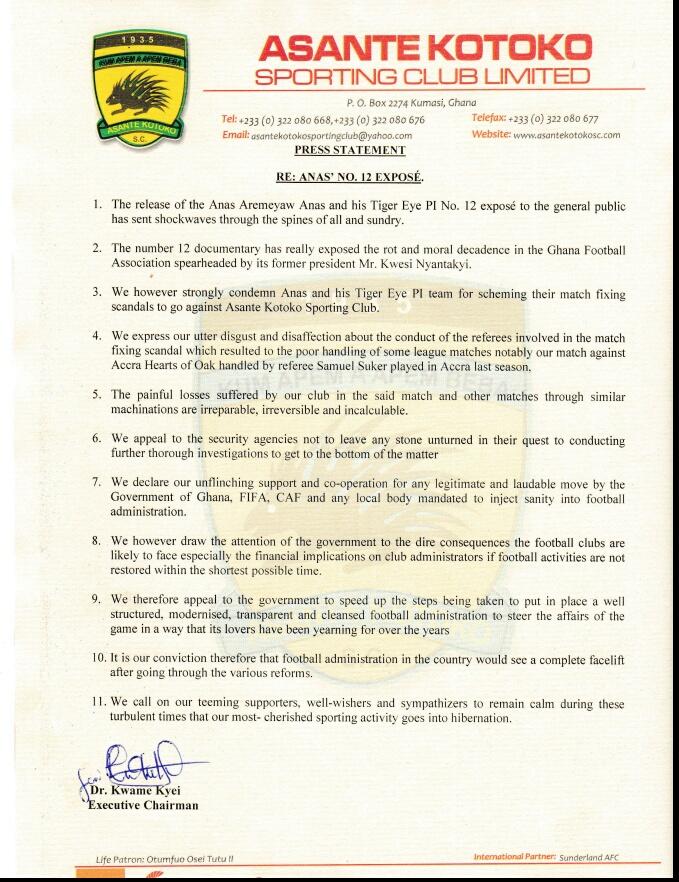 The team described the loss as “irreparable” and called for more inquests into the trend of match-fixing.

However, the team expressed support for the government’s interventions in ensuring the game would be put in a better place going forward.

The statement also looked at the current injunction on the Ghana Football Association and all football-related activities in the country and said that football clubs would face “dire consequences” if there was no resumption within a very short spell.

Premier League clubs were getting ready for the second round of the Zylofon Cash Premier League when the freeze was announced and Kotoko says that activities should continue quickly.

The statement ended with a call to supporters to stay patient in this period of “hibernation”.

Kotoko themselves announced a one-week break for its players on Tuesday.