Atletico Madrid midfielder Thomas Partey has been named the footballer of the year at the maiden edition of the Ghana Football Awards.

The 24-year-old was also named the Foreign-based player of the year, making him the biggest winner on the night.

He beat stiff competition from Albert Adomah, Jordan Ayew and Goalkeeper Richard Ofori who have all had impressive seasons last year.

Former WAFA midfielder Majeed Ashimeru was honored with the Future Star of the Year award.

Black Princesses captain Princella Adubea crowned her outstanding season with both club and country by being awarded the Women’s Footballer of the year award.

Thomas Abbey, formerly of Hearts of Oak won the home-based player of the year award.

Black Stars captain Asamoah Gyan was honored with the Thumbs-up Award for giving back to the society whilst ex-Black Stars defender Anthony Baffoe was recognized as the Living Legend.

Below  is the complete list of the award winners;

1. Goalkeeper of the Year

4. Foreign-based Player of the Year

5. Goal of the Year – Joseph Mensah

8. Home-Based Player of the Year

9. Coach of the Year

11. Ghanaian Footballer of the Year 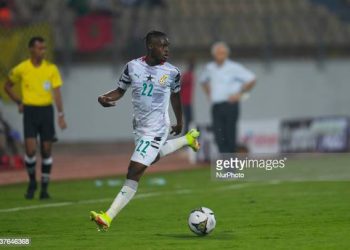