The deal was announced by both Hearts of Oak and FK Tirana on Friday morning.

Tirana technical director, Hector Como, welcomed the player who is set for his medical.

This season, the midfielder scored twice for the Phobians in the first round of the league.

Cobbinah’s exit from the team had been on the cards for a while especially after last season when he, Thomas Abbey, Vincent Atingah and Kwame Kizito refused to extend their contracts with the club. 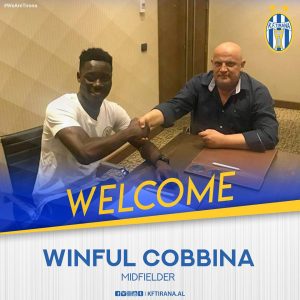 Cobbinah was part of Ghana’s team that won the 2017 WAFU Cup tournament and made the tournament’s best team together with Thomas Abbey, Isaac Twum, and Stephen Sarfo.

He was named Best Player of the 2017 MTN FA Cup competition despite Hearts’ 3-1 loss to Kotoko in the final in Tamale.