Ghana’s Abdul Majeed Waris will be playing for Ligue 1 side, FC Nantes, on loan from Lorient for the 2018/ 2019 season.

The deal was confirmed by Nantes on Tuesday who unveiled the player and handed him the number 10 jersey. 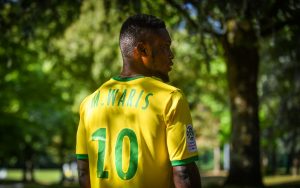 The club said it was delighted to have Waris on board after his stints with FC Porto (last season), Valenciennes, and Lorient.

Fellow Ligue 1 side, Saint-Etienne, was said to be interested in signing the player on loan too but they lost out on his signature.

The team also announced the deal had a full purchase option that could be activated should Waris impress them enough in the season.

Nantes start the French league season with a clash with Monaco on August 11 and Waris is expected to be part of the team for the tie.