Modric won his third Champions League title in a row in May and guided Croatia to their first World Cup final in July.

Salah received the Puskas award for the best goal, for his effort against Everton in the Premier League at Anfield last December.

Peru’s supporters won the Fifa Fan Award after many thousands of them flew to Russia in support of their nation – playing at the finals for the first time since 1982. This accolade was voted for solely by supporters.

What’s the difference between the Ballon d’Or and Best Fifa?

This is the third edition of the Best Fifa Football Awards, set up after football’s world governing body ended its association with the Ballon d’Or award.

A version of the Ballon d’Or has been awarded by France Football magazine since 1956, but was merged with Fifa’s World Footballer of the Year award from 2010 to 2015.

The governing body then introduced the Best Fifa Football Awards, with Portugal international Ronaldo the first recipient of its main prize in January 2017.

Voting for the player and coach categories was conducted by national team captains and managers, selected journalists and, for the first time, an online poll of fans. Each accounted for 25% of the total.

Luka Modric ended Cristiano Ronaldo and Lionel Messi’s dominance of the best individual accolades in world football, which had stretched back to 2007, when Kaka won the Ballon d’Or.

Modric made 56 appearances for club and country as he won the Champions League and reached the World Cup final – beating England in the semi-final – in what he admitted before the ceremony was his “best season ever”.

Former England international Chris Waddle, working as a BBC Radio 5 live pundit, indentified Modric as the type of player that Gareth Southgate’s men were missing in that semi-final because of his ability to single-handedly influence games with his understanding and distribution.

The former Tottenham midfielder won the Golden Ball award for the best player in the World Cup after their final defeat by France.

He scored in Croatia’s opening two matches of the group stages and also set up one goal.

Croatia manager Zlatko Dalic paid tribute to his talisman after the result was announced, saying the midfielder is like “my assistant in the field”.

“Luka Modric is the captain of my team, he’s the best player in my team and in the world, and he deserves this award,” said Dalic.

After receiving the award, Modric said he was “honoured” and thankful to all the coaches he has worked with for getting him to this stage.

“This award is not just mine. It is my team-mates from Real Madrid and Croatia. Without my coaches, I would not have won this and without my family I would not be the player I am today,” said Modric.

Brazil and Orlando Pride forward Marta won the award for the best female player for the sixth time.

Her first recognition from Fifa for being the best female player in the world came in 2006.

She led Brazil to the Copa America Femenina title in April, as they won all seven matches – although she only scored one of their 31 goals.

Marta scored 13 goals and set up six more as Orlando Pride reached the NWSL play-off semi-finals in the United States – earning herself a place in the league’s team of the year.

“This means so much, but it is not only about Marta, it is about my team-mates and women’s football,” said the 32-year-old.

“Most importantly, it is good to see women’s soccer grow each year. If I keep doing well and that can help off the field too, then I am happy.” 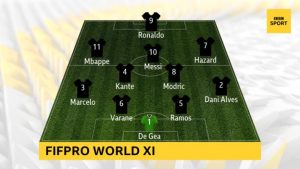 Fifa made five changes to the side selected in 2017.

Kylian Mbappe, 19, was rewarded with a place in the side after winning the award for the best young player at this summer’s World Cup for his impressive performances for France.

There was also room for Chelsea and Belgium forward Eden Hazard, and his club mate N’Golo Kante, while Manchester United’s David de Gea was named in goal and Real Madrid’s Raphael Varane took his place in the heart of the defence.

However, there was no place in the World XI for Thibaut Courtois, who was voted as the best goalkeeper in the world, or Salah, a best men’s player of the year finalist.

France’s Didier Deschamps won the award for the best men’s coach in 2018.

The former Marseille, Juventus and Chelsea midfielder captained his country as they won the World Cup in 1998, before guiding them to victory again in Russia in July.

Deschamps won the trophy ahead of former club and international team-mate Zinedine Zidane – who won his third successive Champions League title before resigning as Real Madrid manager – and Croatia manager Zlatko Dalic, whose side lost to France in a thrilling final in Moscow.

“I would like to thank Zinedine Zidane and Zlatko Dalic. They are both winners,” said the French manager.

“We are nothing without our players. I would like to thank the whole team. They worked hard to get me here tonight.”

Two of his players, Ada Hegerberg and Dzsenifer Marozsan, were nominated for the best women’s player award.

The Fifa Puskas award, named after the iconic former Hungary forward Ferenc Puskas, is given to the player who scored the best goal of 10 nominations.

Mohamed Salah’s stunning effort to open the scoring for Liverpool in his first Merseyside derby was the winner.

The Egyptian’s sublime curling finish towards the end of the first half at snowy Anfield, in December 2017, was later cancelled out by a Wayne Rooney penalty in a 1-1 draw.

With success in the award for the best goal, and having been nominated in the best player category, the 26-year-old says he is hungry for more individual recognition.

“I’m sure it is not the last nomination because I always want to be better than last season,” said Salah.

“My favourite goal was the one against Everton because it was my first derby, but all of them were very important.”

“[Playing for Egypt in the World Cup] was one of the best moments in my life and this is the dream for us as Egyptians, and human beings, to play at the tournament.”

Courtois played every minute of Belgium’s seven matches at the World Cup, as the country went on to claim third place – their highest finish at the tournament.

“I would like to thank my team-mates and my coaches – they always give the best advice,” said Courtois.

VVV-Venlo striker Lennart Thy missed his side’s Eredivisie game against PSV Eindhoven in March to donate stem cells to try to help a leukaemia patient.

The 26-year-old German, who was on loan at the top-flight Dutch club from Werder Bremen, joined the donor register seven years ago and was a DNA match.