Mubarak Wakaso eager to move on from car accident.

Ghana and Deportivo Alaves, midfielder Mubarak Wakaso, has spoken for the first time following a car crash he suffered hours before he joined the Black Stars camp for the cancelled Afcon qualifier against Sierra Leone.

The midfielder was on his way to Bilbao to catch a flight when the incident occurred but he managed to emerge unscathed.

It is true that something like that happened but it isn’t something that I want to explain.

It has already happened and as you can see I am okay.

We just need to give thanks to God for saving me from such an incident.

I want to forget about it and think ahead,”he told journalists. 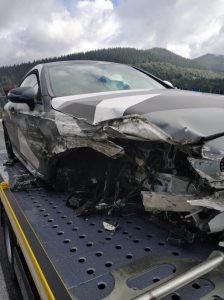 It remains unclear if he will feature in the Black Stars friendly against Asante Kotoko on October 12.