Leicester City owner Vichai Srivaddhanaprabha is feared to have died in a helicopter crash outside the club’s King Power Stadium.

The helicopter took off from the pitch around one hour after the Premier League match against West Ham on Saturday, at approximately 8.30pm, and came down just moments later in a staff car park.

Police and emergency services rushed to the scene, with video footage showing flames coming from the crashed helicopter. The area was quickly evacuated.

No casualties have yet been confirmed but, according to Reuters news agency, Srivaddhanaprabha was one of five people on board the aircraft when the crash occurred. His daughter, Vichai, was also understood to be on board.

A Leicester City spokesman said: “We are assisting Leicestershire Police and the Emergency Services in dealing with a major incident at King Power Stadium.

“The club will issue a more detailed statement once further information has been established.”

Srivaddhanaprabha leaves the stadium in his helicopter, which lands on the pitch, after every Leicester home game.

The Thai businessman, who owns the King Power company, bought the club in 2010 and became chairman the following February.

Under his ownership, Leicester won the Premier League title in the 2015/16 season.

Leicestershire Police has said the Air Accident Investigation Branch (AAIB) will be leading the investigation into the circumstances of the helicopter crash.

In a statement released in the early hours of Sunday, the force said: “The aircraft came down in a car park near the stadium shortly after 8.30pm yesterday evening (Saturday 27 October) with Leicestershire Police, East Midlands Ambulance Service and Leicestershire Fire and Rescue Service all responding to the incident.

“A cordon is currently in place at the scene to enable the AAIB to examine the area and complete their initial enquiries.

“Leicestershire Police will be supporting the AAIB in its investigation, liaising closely with Leicester City Football Club as enquiries continue.”

BT Sport presenter Jake Humphrey had pointed to the aircraft from the studio during a live broadcast at the stadium and said: “As you can see the owners are now heading off.”

The crash occurred just moments later and was confirmed by the host live on air.

Witness Megan Blockley, who was across the road when the crash happened, said: “The damage was really bad. They’d just put the fire out when I got there and it had been burned right through.

“I was just in the bingo hall across the road and I heard the sirens.

“I rushed out and there were four fire engines and loads of police.”

One man, who wished not to be named, but has had a season ticket for over 40 years, said: “I saw Kasper Schmeichel run out first and then loads of security guards and stewards.

“I was stood outside the ground but it crashed on the other side.

“I hope everyone is OK.”

Jonathan Ashworth, Labour MP for Leicester South, tweeted: “Awful horrific scenes at @LCFC with the helicopter crash. I’ve been in touch with our emergency services and thanked them for responding so quickly. Our hopes and prayers for all those caught up in this desperately awful incident.”

West Ham defender Pablo Zabaleta, who played in the game, tweeted: “My thoughts and prayers are with all those involved in the helicopter accident at Leicester City.

His teammate Declan Rice tweeted: “Horrendous scenes at the king power tonight, my prayers & thoughts go out to everyone involved at Leicester.” 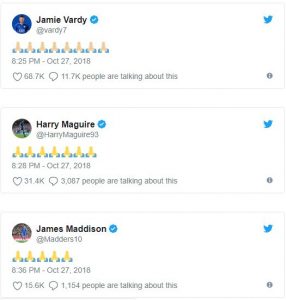 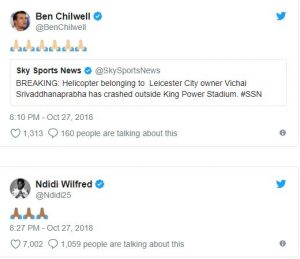