A wonderful volley from Gladys Amfobea in the 12th minute settled the tie between Ghana and Algeria in the first match of the 2018 Total African Women’s Championships at the Accra Sports Stadium.

The Black Queens were hoping to start on a good note as they began their journey to win the tournament for the first time in their history and book a place in the 2019 Women’s World Cup in France.

It was the Algerians, however, who began brighter and took charge of the first five minutes while Ghana sought to settle down.

But as soon as that a few challenges were won in midfield by Juliet Acheampong, the Queens began to show their intentions.

They kept the pressure on Algeria and got their breakthrough from Amfobea who reacted to a loose clearance to volley home her attempt over the head of Kahina Takenint in post for Algeria.

The Ghanaians went after more goals but indecision left them short of that target.

The pattern was the same in the second half and Ghana coach, Bashir Hayford, made the changes with Jane Ayieyam and Grace Asantewaa coming on to give more initiative.

Ayieyam managed to score but was rightly flagged offside.

The tempo of the Queens was upwards but the poor decisions in terms of the final pass were still there until the end of the game. 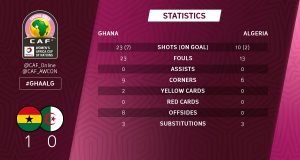 Queens not regal enough in attack

Despite their dominance, the Black Queens were not ruthless enough on the offensive. They opened Algeria up so many times but they failed to complete the process on so many occassions; something which did not escape the attentions of the team’s head coach Bashir Hayford. 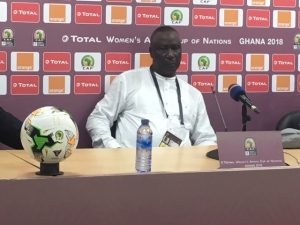 “We did not struggle today but we missed a lot of chances. We have to get better at that. We could have scored about five on the day but that did not happen.”

But while Hayford may have been displeased with what he saw from the Queens, Algeria head coach, Fertoul Radia, was rather relieved that her opponents did not have their killer instincts on alert to take advantage of their own shortcomings. 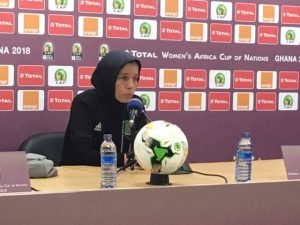 “We had things tough for us today. We conceded a goal after 10 or 11 minutes and we made individual mistakes in terms of marking in midfield. We were not able to stop their short, precise passes. We were lucky not have given away a lot of goals.”

Ghana will play against Mali on Tuesday November 20 at 3:30 pm at the Accra Sports Stadium while Algeria take on Mali at the same venue at 6:30 pm.

Thomas Partey shortlisted for BBC African Footballer of the Year

Thomas Partey shortlisted for BBC African Footballer of the Year