This was announced by FIFA on Tuesday as it published the payments made to various clubs around the world for releasing their players to feature in the 2018 World Cup tournament.

Clubs like Al Ahly of Egypt, Horoya of Guinea, Enyimba of Nigeria, Esperance of Tunisia, Chippa United of South Africa all got some compensation for the use of their clubs in the tournament. 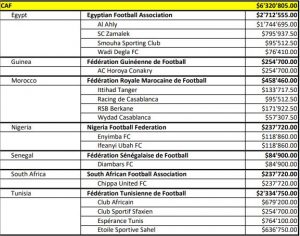 These clubs had the highest number of players in the tournament.

In total, FIFA paid out USD 209 million to 416 clubs from 63 associations all around the world.

CAFCL: Dominant Hearts of Oak too good for Kamsar in 2-0 win