“I hope for a new beginning for Ghana football”- Prez. Akufo Addo to NC

The President, Nana Addo Dankwa Akufo Addo, has highlighted his wish for a complete reset of the nation’s football system as the major outcome of the work of the FIFA Normalisation Committee in Ghana.

The President stated this at his last meeting with the press at the Jubilee House on Wednesday evening.

The Normalisation Committee was set up by FIFA in September to run Ghana football in an interim capacity to replace the erstwhile Executive Committee following the fallout of the “Number 12” documentary.

Answering a question from sports journalist, Michael Oti Adjei, the President, said that at the completion of the tenure of the Normalisation Committee, he wanted to see Ghana football being better off than its present state.

“What I am hoping for is that, through this Normalisation Committee, a new beginning will be started in the administration of Ghanaian football because the process is there for the creation of a new constitution and a new structure that will hopefully prevent the kinds of things we have seen in the past.

I am hoping that the people who are on the Normalisation Committee will lead the process of a more sane administration and they will make rules that will be more transparent and they will try to balance the various interests in terms of Ghana football. 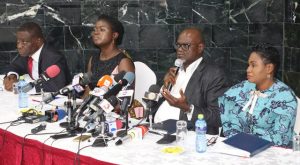 I am talking about fans, players, club owners and administrators and there must be a way of linking them.”

The President highlighted the fact that even though he and the government understood that the running of football was to be left to ‘football people’, one of government’s main duties was to maintain law and order and taking actions in relation to the Anas documentary was based on that obligation.

“I think that the fundamental FIFA arrangement in the running of football is the right one. Football people should run football and government should stay out of it.

But then, football, like any other activity in a state, has to be carried within the laws of a country.

All the things we saw in the video that pointed to the possibility of criminal activity could not have been avoided by government. Something had to be done about those things.”

Football on its way back?

On December 14, the Normalisation Committee announced that it would roll out a new competition for Premier League and Division One League clubs. The competition would start in January 2019 and finish in April 2019.

The Committee said that the competitions (especially the one for the Premier League clubs) would help find out the nation’s representatives for the CAF competitions.

Jose Mourinho says he has a future without Manchester United