Ahead of Manchester United’s clash with Tottenham at Wembley on Sunday, January 13, 2019, Citi Sports editor, Nathan Quao, flies back in time to witness Man United’s most famous Premier League victory at Tottenham Hotspur.

Starting lineups on the day:

The year is 2001 and as a 15 year-old Manchester United fan, going to Tottenham (via the television) gave me a nervous feeling always.

Even when they were not a top four side then, there was a certain aura around Tottenham and I always told myself in the one million conversations I had in my head that the North London side was good and they played positive football.

So, facing them on that September day was going to be a tough one.

My worst fears came true when they took the lead through a Dean Richards header in the 15th minute.

The culprit was Nicky Butt who had been a bundle of nerves all game. He gave a free kick away and then, was part of the gang that conceded a corner and then, he and the rest of the team were duly rewarded for poor play.

Ten minutes later, there was more pain. Man United’s midfield was turned over easily and a Gustavo Poyet pass released Les Ferdinand and he was one on one against Fabien Barthez.

The outcome was already apparent. 2-0 to Tottenham. 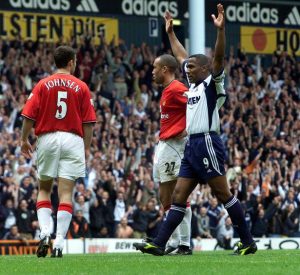 I was shocked. I was gripped with fear. I felt so horrible. But Spurs did not seem to care.

On the stroke of half time, Christian Ziege met a lovely cross from the right wing to head the ball past Barthez. 3-0 to Spurs.

Everything that could go wrong for Manchester United went wrong.

There was utter chaos about the display. Players were sluggish. Passes lacked no direction and it was as though Spurs were the only ones on the pitch in that half.

Half time came and went and the second half got on.

What really did I expect? For starters, a better Man United performance and a goal to boot just for some pride. Nothing major. When you are 15, you do not ask for much.

However, it turned out that Manchester United had plans of making the day one that would stay in history forever.

12 minutes later, Laurent Blanc put in another header for Man United from a corner. 3-2.

Were Spurs crumbling? Were they powerless in the face of the spirit of ‘comebackability’ that often possessed Manchester United?

Then, I did not care. Nothing made sense. All I wanted was one more goal for Man United to even the score.

And that goal came from Ruud Van Nistelrooy in the 72nd minute and guess what? It was a header. 3 headers Spurs could not deal with. I was buzzing.

At this point, one of two things could happen.

Either Man United would go on to win or Spurs would steady the ship and get a draw. They did not look like they would get all three points on the day.

They were shocked. Rattled. Stunned.

But Man United did not have any compassion whatsoever. The onslaught continued.

4 minutes after Van Nistelrooy scored, a good passing sequence in midfield sent Juan Sebastian Veron free and he fizzed a shot into the Spurs net. 4-3 to Man United.

The exclamation mark was added to that emphatic footballing sentence when David Beckham, the recipient of a pass from Ole Gunnar Solksjaer (remember him? The caretaker at Man United now), sliced his shot into the Spurs net. 5-3. 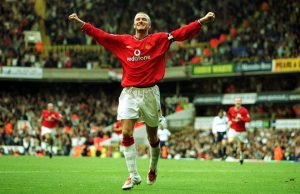 Man United had come from 3-0 down to win at White Hart Lane.

Sir Alex Ferguson had done a number on Glenn Hoddle in the most extraordinary manner.

Fast forward to 2018 and Man United go to Spurs again this weekend.

But times have changed. Spurs are a better team now and they possess the tools to give any top side massive problems. Man United will be in for a very difficult afternoon at Wembley.

However, if there is anything that Ole Gunnar Solksjaer can show to his players to get them revved and inspired for their test at Wembley, it is the tape of Man United’s Premier League clash at Spurs in September 2001.

It could just be the needed inspiration for a great display.

For the game on January 13, 2019, though, if you want to be a part of the fun, tune in to Citi 97.3 FM for live commentary at 4pm as part of the station’s coverage of the Premier League.

Moving beyond the Normalization of football administration in Ghana [Article]

Moving beyond the Normalization of football administration in Ghana [Article]