How Solksjaer outwitted Pochettino to win at Wembley- Christopher Nimley

Man United won their 5th straight league match under caretaker manager, Ole Gunnar Solksjaer, on Sunday after beating Tottenham 1-0 at Wembley in a game which was live on Citi 97.3 FM.

Citi Sports pundit, Christopher Nimley, put down his observations after the game and revealed how a singular tactical tweak gave Man United the advantage on the day.

Spurs deployed the 4-3-1-2 diamond formation at the start of the match meaning they had four men in the middle in the persons of Christian Eriksen, Moussa Sissoko, Harry Winks and Dele Alli.

Within the formation, the system required Son Min-Heung to be very close to Harry Kane in Spurs’ attack with above-mentioned midfield quartet behind them.

It also ensured that the 2 fullbacks (Ben Davis and  Kieran Trippier) provided width.

Man Utd had observed that Spurs had played their last few matches with that shape and and to nullify the threats within Spurs’ tactics, Man United needed to play with a 4-3-3 formation of Marcus Rashford, Anthony Martial and Jesse Lingard upfront. The rest of the team was Paul Pogba, Ander Herrera and Nemanja Matic in midfield and a backline of Ashley Young, Phil Jones, Victor Lindelof and Luke Shaw.

To everyone’s surprise, Lingard was the player tasked to play through the middle in attack whereas Rashford looked the most obvious choice for that role.

Spurs was not expecting Man United to deploy a false number 9 on the day. So, Solksjaer  dropped Lingard into midfield and this matched Spurs in a 4v4. 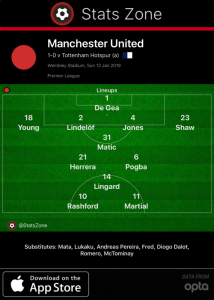 Man Utd had the physical presence of Pogba and Matic and the intelligence of Herrera to fight off whatever Spurs had in the middle of the park.

The direct quick approach of Rashford and Martial was the threat that Spurs never dealt with until they conceded from the intelligence and quality of Pogba’s and the finish from Rashford.

Pogba told Sky Sports that the sequence to release Rashford was something they had worked on after they noticed that Spurs had a set pattern of overloading one side of the pitch in attack.

So, Man United had to get the ball and switch the play down Spurs’ weak side for chances.

Spurs needed to respond to going behind and the tone was set for the rest of the game.

In the second half Spurs had to change tactics especially when they lost the combative presence of Sissoko to injury.

Son went to the left and Erick Lamela, who had been brought on for Sissoko, was moved to the right.

The two wide men went narrow and allowed Davis and Trippier to still create the width they required to push Utd backwards.

Man United did not change shape but tactically relied on the awareness of Matic and Herrera to shield the back and release Pogba to feed the front three.

Spurs dominated and this, in my view was due to Solksjaer doing what Spurs knew what expected in the first place which was a 4-3-3 system by playing Rashford through the middle and Martial and Lingard wide.

Although Spurs changed from the diamond they still had their 2 wingers coming inside and this ensured they had 4 men in midfield as against Man United’s 3.  It all eventually came down to lady luck and some brilliant goalkeeping from David De Gea. The Spanish goalkeeper made 11 saves on the day to keep Spurs out.

Solksjaer pulled a fast on Pochettino by giving Lingard the false 9 role and that disrupted Spurs to the point of concession.

Spurs did very well to react and change their shape to get a way back. On any other day, they would get something from the tie but they were up against De Gea, who was in unbeatable mode at Wembley.

Solkjaer proved he knew a thing or two about tactics on the day and everything else went his way.

Christopher Nimley is a regular pundit on Citi FM’s live coverage of the Premier League every match day. He is the former coach of Division One League side, Vision FC.