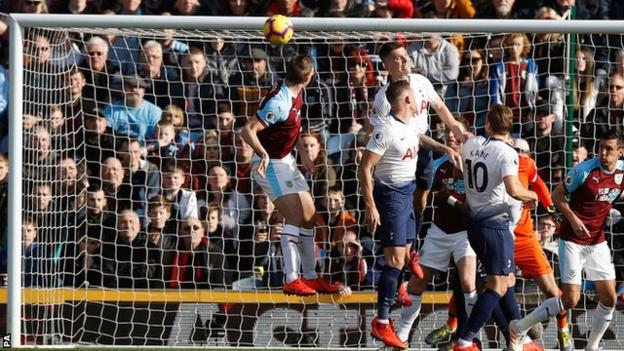 The Argentine, who was angered by a number of decisions including the award of a corner that led to Burnley’s opener, had to be pulled away by Clarets defender Phil Bardsley as his frustrations spilled over.

Pochettino later said he had “crossed the line” and would “maybe” apologise to Dean.

Chris Wood broke the deadlock for the hosts early in the second half as he rose to head home Dwight McNeil’s inswinging corner – his fourth goal in as many games.

Harry Kane, making his first appearance since 13 January, equalised after latching on to Danny Rose’s quick throw-in and poking past Tom Heaton, before Ashley Barnes tapped in Burnley’s winner late on.

Burnley rise to 13th and are now six points clear of the relegation places.

Tottenham should have been buoyed by the return of Kane, who made his first appearance since picking up an ankle injury in January’s defeat to Manchester United.

But he struggled to get into the game in a first half that saw him on the end of several hefty challenges by Ben Mee and James Tarkowski. When he did escape their attentions, he fired wide from the edge of the box and saw a header easily saved by Heaton.

He improved in the second period, drawing a magnificent save from Heaton who sprang acrobatically to his right to keep out a swerving shot bound for the top corner.

But not even the in-form Burnley goalkeeper could deny Kane a goal on his return as he latched on to Rose’s throw and poked home to level.

However, with Spurs pouring on the pressure late on the Clarets stood firm, with second-half substitutes Fernando Llorente and Erik Lamela both denied by blocks.