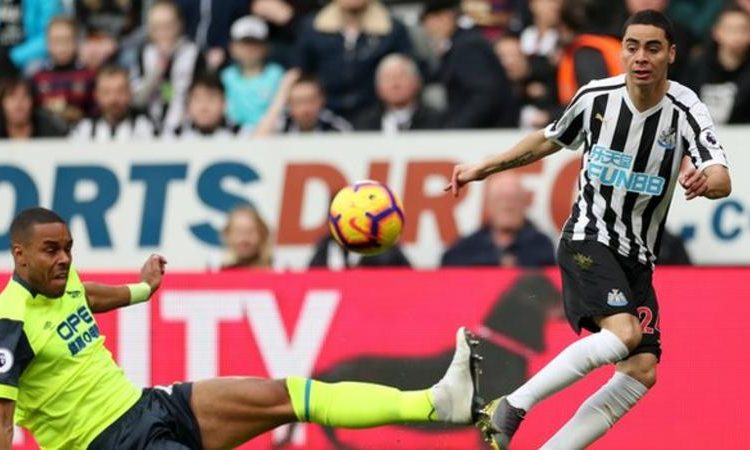 After Newcastle missed several chances in the first half, striker Salomon Rondon swept in the opener 59 seconds into the second period.

Ayoze Perez drilled in the second although Paraguay forward Almiron could not add the goal his display deserved.

Huddersfield, who stay marooned at the bottom of the table, had skipper Tommy Smith sent off after 20 minutes for a high tackle on Almiron.

Newcastle recorded their third successive Premier League win at St James’ Park – for the first time since last April – to move up to 14th.

United boss Rafael Benitez’s only gripe may be that they should have won by a more convincing margin against a Huddersfield side that managed only one shot on target.

Newcastle’s Kenedy and Sean Longstaff both hit the woodwork in the final half-hour, while Huddersfield goalkeeper Jonas Lossl produced some superb saves as the home side peppered the away goal with 29 shots.

Town have lost all four of their matches under new manager Jan Siewert and remain 14 points adrift of safety.

Excitement and expectation has accompanied Almiron’s arrival on Tyneside, with the 25-year-old becoming their most expensive signing since former England striker Michael Owen joined from Real Madrid in 2005.

The Paraguayan was handed his full debut by Benitez after coming on as a substitute at Wolves earlier this month – and he did not disappoint the home fans with a sharp performance.

The £21m signing, who started on the left of a front three alongside Rondon and Perez, caused problems for the visitors with his pace, while showing enough trickery and awareness to suggest he will have a major impact at St James’ Park.

Although he could not cap an impressive performance with a goal, he came mighty close.

Almiron hit the post in the 12th minute with a confident chip over Lossl, racing clean through following a nice passing move from the home side.

Two other first-half opportunities saw him almost open the scoring: an instinctive left-foot strike stopped low to his right by an alert Lossl and another that squirmed under the keeper before defender Chris Lowe hacked away from his goalline.

Almiron also played a key role in another of the game’s pivotal moments, forcing a desperate lunge out of right-back Smith that left referee Kevin Friend reaching for the red card.

In the second half, he continued to pose problems for Huddersfield and it was unsurprising to see him receive a loud and standing ovation when he was substituted in the 81st minute.

“You saw today he can make a massive difference to us, he is a quality player,” Perez said.