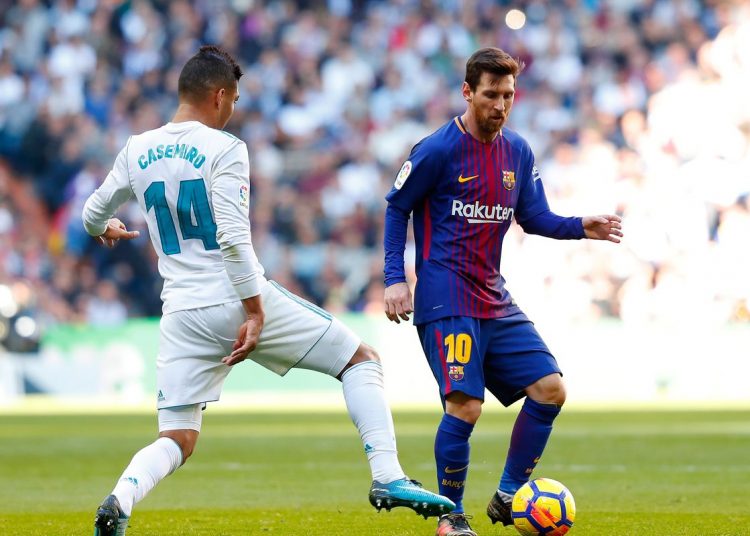 Real Madrid and Barcelona will renew the world’s greatest club football rivalry when they meet in a La Liga match at Estadio Santiago Bernabeu on Saturday, 2 March 2019, kick-off at 7:45pm on SS7, Max2 & SelGo4.

‘El Clasico’, as the rivalry is known, has provided some absolute classic matches down the years and DStv and GOtv viewers should be treated to another feast of football between ‘Los Blancos’ and the ‘Blaugrana’.

The 178th La Liga match between Real and Barca is set to be a key factor in the title race this season: a win for Real will bring them back into the battle for Spain’s top honour, while Barca will feel that a victory at the Bernabeu will remove one of their last major hurdles on the path to glory.

Both teams enjoyed victories in the previous round of La Liga: Real claimed a controversial 2-1 away win away at Leganes (thanks to two penalties, one apiece for Karim Benzema and Gareth Bale), while Lionel Messi was in ominous form for Barca as they won 4-2 away to Sevilla.

The Argentine master netted a hat-trick at the Estadio Ramon Sanchez Pizjuan to move further clear at the top of the Spanish top-flight scoring charts. 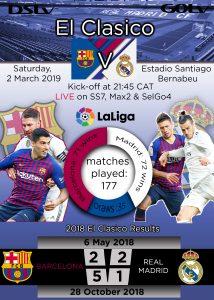 The teams have clashed in 177 previous La Liga games and there’s little to choose between them: Real have 72 wins compared to 71 for Barcelona, while 34 encounters have ended in draws.

Their last La Liga clash was at the Camp Nou in December last year, with Barcelona racking up a 5-1 victory thanks to a hat-trick by Luis Suarez and goals from Philippe Coutinho and Arturo Vidal.

The teams will also be more than familiar with each other given that they played two legs of a Copa del Rey tie in the month of February, meaning Real and Barca will have faced each other three times in the space of just under a month.

Luka Modric – The reigning World Player of the Year is the man who makes Real Madrid tick in midfield, using his passing and movement to keep the team constantly on the boil. He’ll have his work cut out against Barcelona’s midfield on Saturday night.

Vinicius Junior – Regarded very much as a young Cristiano Ronaldo in the making, Brazilian attacker Vinicius is already a favourite of the ‘Los Blancos’ fans. He would make himself even more popular with the Bernabeu faithful if he can inspire a victory over Real’s hated rivals from Catalonia.

Lionel Messi – The Argentine master scored his 50th career hat-trick last weekend and will come into ‘El Clasico’ in great form. He has haunted Real many times over the past decade or so and will look to inspire Barcelona to a potentially decisive La Liga win.

Gerard Pique – Barcelona aren’t just about free-flowing football, they also have one of the better defensive records in La Liga this season. To that end, centre-back Gerard Pique will be a key figure as they look to keep a clean sheet at Estadio Santiago Bernabeu.