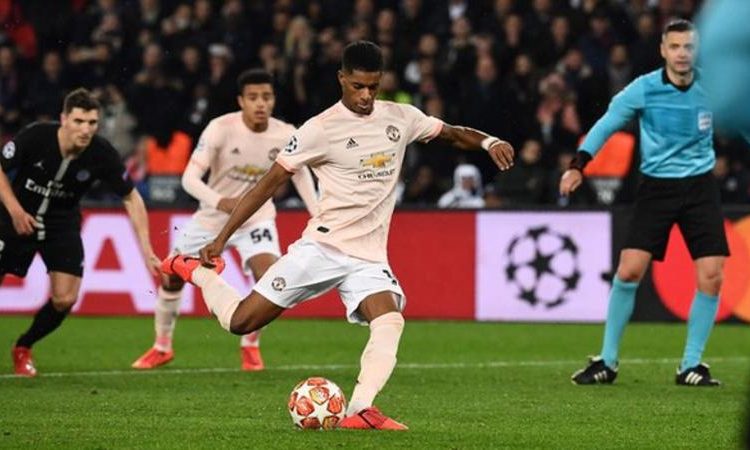 The odds were stacked against United in Paris, but they became the first team in Champions League and European Cup history, at the 107th time of asking, to overcome a 2-0 or greater home first-leg deficit.

Ole Gunnar Solskjaer’s visitors got the perfect start thanks to Romelu Lukaku’s opportunist strike after two minutes, the Belgium striker latching on to Thilo Kehrer’s blind backpass and finding the net.

PSG went 3-1 ahead on aggregate when Kylian Mbappe fed a pass to the unmarked Juan Bernat, who slotted home at the back post.

The hosts then had a succession of chances, with makeshift right-back Eric Bailly enduring a torrid time in his 35 minutes on the pitch, before injury saw him replaced by Dalot.

The game appeared to be petering out to its conclusion before Dalot fired the ball against the arm of the unfortunate Kimpembe, and after a long delay while the referee consulted his pitch-side monitor, Rashford’s ice-cool penalty sealed a remarkable win.

The draw for the quarter-finals takes place on Friday, 15 March.

Solskjaer’s side roll back the years

The result came 20 years on from United’s most memorable triumph when they claimed the treble of Premier League, FA Cup and Champions League, the latter after Solskjaer’s own injury-time winner in the final against Bayern Munich.

The Norwegian has overseen a remarkable turnaround which has seen the side collect 14 victories from 17 games in all competitions, including away wins at Tottenham, Arsenal, Chelsea and now PSG.

The former United striker has not only brought back the smiles to a side that was so abject before Christmas, but done so with outstanding tactical awareness and without the services of 10 first-team players.

Paul Pogba’s red card in the first leg meant he sat out the game alongside the nine injured players, so Bailly was given a start at right-back. However, the Ivorian turned in a wretched performance and was caught out of position time and time again.

An apparent injury to Bailly allowed Solskjaer to rectify this by bringing on Dalot and United looked much more solid thereafter.

Chris Smalling was superb at the back, contributing seven clearances and three interceptions alongside the unflappable Victor Lindelof, while midfielders Scott McTominay and Fred stood up magnificently against opposite numbers Marco Verratti and Marquinhos.

And up front, the often maligned Lukaku worked tirelessly and took his tally to 15 for the season with two well-taken finishes.

United have now won nine straight away games under Solskjaer and reached the last eight for the first time since 2014.

It now seems a case of when, not if, Solskjaer is named permanent manager.