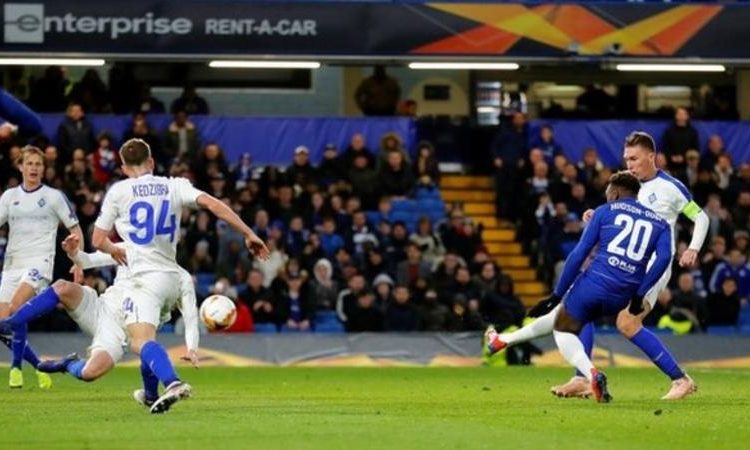 Callum Hudson-Odoi scored his third Europa League goal of the season as Chelsea beat Dynamo Kiev in their last-16 first-leg match to put one foot in the quarter-finals.

The lively Pedro opened the scoring from close range as he ran on to Olivier Giroud’s backheel.

Teenager Hudson-Odoi added a late third to put Chelsea in control of the tie.

Dynamo Kiev – who have never won in their 15 visits to England – did not manage a shot on target.

The second leg is at Kiev’s Olympic Stadium next Thursday at 17:55 GMT.

The Blues, who won the Europa League in 2013, may need to win the tournament to qualify for next season’s Champions League as they are sixth in the Premier League.

Maurizio Sarri made six changes but still named a relatively strong team, with Eden Hazard, N’Golo Kante and Gonzalo Higuain on the bench in case of emergency.

Pedro scored the opener when he moved in from the left and played a one-two with Giroud before placing the ball through the legs of goalkeeper Boyko.

He then missed a glorious chance to double the lead as he fired straight at the keeper from six yards from Davide Zappacosta’s cross.

Ross Barkley had a shot stopped by the goalkeeper’s legs, before Pedro had a volley and 18-yard effort saved.

After the break, the ex-Barcelona winger again tested Boyko as he cut in from the right but his low effort was stopped.

It looked at that stage like Chelsea might be going to Ukraine with only a one-goal lead, but then Willian stepped up with a free-kick which left Boyko rooted to the spot.

Hudson-Odoi scored after a pass from fellow substitute Ruben Loftus-Cheek late on to put Chelsea on the brink of the last eight.

Kepa Arrizabalaga, who kept his place in goal, was not needed to make a save, although he flapped at a cross late on.

Hudson-Odoi has enjoyed the Europa League this season, netting against PAOK Salonika in the group stage and at home to Malmo in the last round.

The 18-year-old put in a transfer request in January following a £35m bid from Bayern Munich. However, the club rejected it, despite the fact he has not started a Premier League game.

Sarri’s refusal to give the winger more game time has frustrated Chelsea fans – especially with their recent struggles – and he came on to a great ovation when he replaced Willian with 12 minutes left.

And they chanted his name after he slotted home from 16 yards out after Loftus-Cheek flicked Pedro’s cross-field pass into his path.