CAFCC: Kotoko qualification in jeopardy after draw with Al Hilal 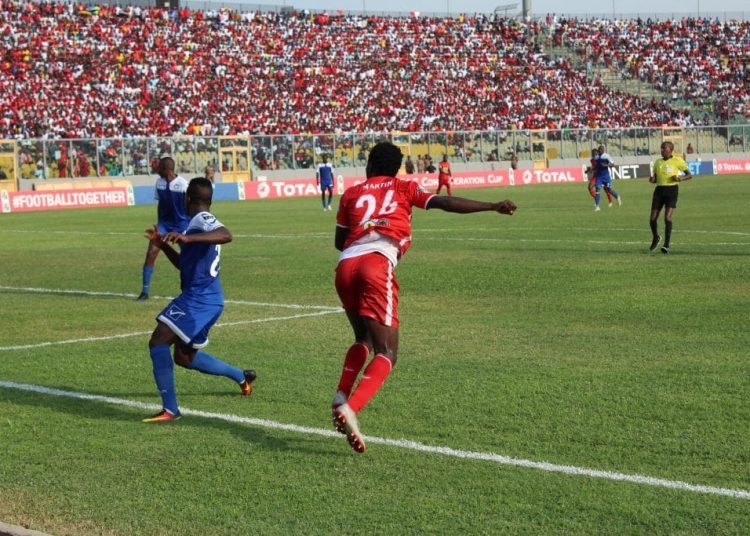 Kumasi Asante Kotoko’s quest to qualify to the quarter finals of the CAF Confederation Cup has hit a snag following a disappointing 1-1 draw with Sudanese Champions Al Hilal.

After Nkana FC beat fellow Zambians Zesco United 3-0 in the other group game, a straight win for the Porcupine Warriors would have guaranteed them passage into the last 8.

But Waleed Bikhet’s first half strike put the Sudanese ahead before a late equalizer from Songne Yacouba left Kotoko needing to beat Zesco away in the last group game to secure qualification.

Al Hilal had the first chance of the game through a corner but Omer Abdalla could only put his header wide.

Mohammed Musa Eldai then clashed with Felix Annan and the Kotoko keeper appeared injured in the process but after treatment, he was good to continue.

A minute later, Wahab Adams rose highest to plant a header to the far post from a Daniel Darkwa corner kick at the other end. The former Aduana Stars captain injured himself in the process and played the rest of the game with a cotton wool in his nostril.

Emmanuel Gyamfi, who had made a quick recovery from injury to start the game, played in Abdul Fatawu Safiu; the latter’s sweeping ball across the face of the Hilal goal was inviting but no Kotoko player was there to connect.

Hilal were dangerous every time they went forward. Atahir El Tahir and and Musa El Dai combined beautifully before the former sent his effort into the side net, much to the relief of the 30,000 partisan crowd inside the Baba Yara.

The first 30 mins proved difficult for CK Akonnor’s men who struggled to break down a very well organised Al Hilal side.  Kotoko’s attackers, Songne Yacouba and Abdul Fatawu were starved of service as Al Hilal overpowered the midfield.

The wingers, Emmanuel Gyamfi and Martin Antwi combined for just one crosses into the Hilal box in the first half as Hilal doubled up on them every time they had possession.

Tactically, Hilal were superior. Having held Zesco United to a 1-1 draw a week prior with 10 men, the tactical intelligence of the Sudanese champions wasn’t exactly surprising.

Just after the half hour mark, the Sudanese were ahead after a moment of brilliant play. And you can’t say they did not deserve it. Captain Abdel Latif Saeed’s delightful cross from the left hand side found Waleed Bikhet unmarked in the box and he guided his header past Felix Annan.

Bikhet, who also scored the winner against Kotoko in the teams’ first encounter, showed great movement in the box to find himself free.

On 40th minute, Kotoko had their clearest chance to equalize. After Martin Antwi’s cross was spilled by Hilal’s keeper Salim Magoola, the ball fell to Emmanuel Gyamfi but the former Wa All Stars speedster sent his effort over the bar from 5 yards out.

Akonnor had his head in his hands in disbelief, and so did everyone else in the stadium.

That was to be Antwi’s last contribution of the game. Akonnor, who had been frustrated with his play all afternoon and remonstrated accordingly, brought in Obed Owusu to replace the former WAFA captain as the first half came to an end.

Kotoko started the second half with more intensity but it took them 15 minutes to come close to scoring. Abdul Fatawu’s free-kick from 45 yards out bounced off the top of the crossbar with Magoola beaten.

Moments later, Abdul Fatawu hit the upright from another free-kick, this time from the right hand side.

It was now becoming evident that Kotoko were most dangerous on the set pieces.

Emmanuel Gyamfi’s decision making was then questioned when he opted for a wayward cross from inside the box when a sumptuous cut-in from the right had set him up for a shot instead.

As Kotoko went desperately in search of the equalizer, Hilal broke free on the counter and Bikhet found himself one on one with Annan. But his powerful drive was tipped over the bar by the Kotoko shot-stopper.

Akonnor brought on the experienced Daniel Nii Adjei for the ineffective Kwame Bonsu and Stephen Nyarko replaced Daniel Darkwa as Kotoko looked to seize control of the midfield.

On 84 minute, Kotoko felt they should have been awarded a penalty when Gyamfi went down in the area following a challenge. But referee Tessema Weyesa waved play on, much to the dismay of a cross section of the Kotoko fans who started to hurl missiles onto the pitch.

The security rushed to calm the situation.

When play resumed, Kotoko got their equalizer; Gyamfi finding Yacouba at the far post to nod in his header. There was a hint of offside but the Hilal players’ protests went to deaf ears. Kotoko were level as the Baba Yara crowd erupted.

The Porcupine Warriors pushed men forward in search of the winner, but it was too late and Hilal held on for their second away point in the group, the only team to do so in this group.

Kotoko with 7 points, will now need to beat already eliminated Zesco United to secure qualification while a draw at home to Nkana could be enough to give Hilal qualification.