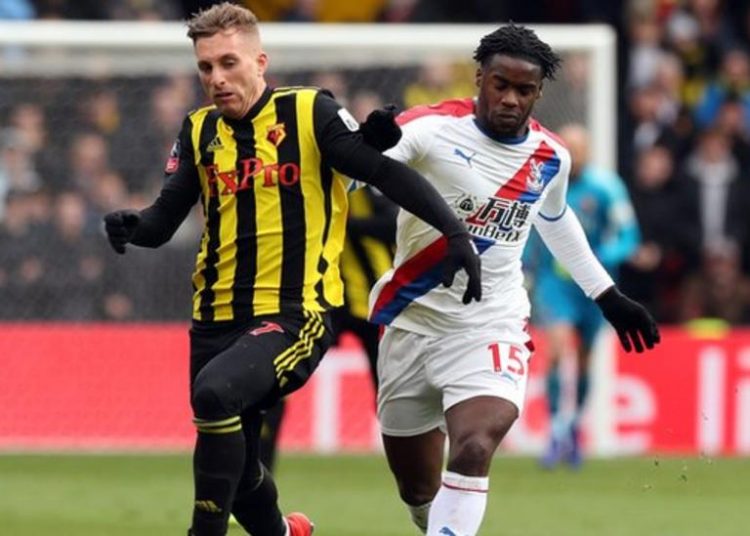 Second-half substitute Andre Gray scored two minutes after coming on to send Watford into the FA Cup semi-finals with victory over Crystal Palace at Vicarage Road.

The Hornets had earlier led through Etienne Capoue’s instinctive finish before Michy Batshuayi levelled for the Eagles, finishing coolly after dispossessing Adrian Mariappa.

But soon after after replacing Will Hughes, Gray fired past Vincente Guaita to send his club into only their sixth FA Cup semi-final.

After retaking the lead the hosts looked the more likely side to score as Troy Deeney saw an effort well saved and Aaron Wan-Bissaka made a crucial intervention to keep out Gerard Deulofeu in the closing stages.

Javi Gracia’s Watford have now beaten Palace three times this season, having done the double over them in the Premier League.

While it may have cost them their best chance of upsetting City at the Etihad, Gracia’s decision proved fruitful with the Spaniard and his team now having an FA Cup semi-final at Wembley to prepare for.

Deulofeu, who netted against City, was their main threat throughout, his livewire running and trickery a constant thorn in the Eagles’ side.

It was the Spanish forward who tested Vincente Guaita in the Palace goal first, wriggling his way into space before firing off a powerful shot as the hosts dominated the opening exchanges.

The Eagles keeper, making his FA Cup debut, was put under pressure throughout the first half and he had already flapped at several crosses before the Hornets took the lead through Capoue.

However, he soon made amends by tipping another vicious strike from Deulofeu over the bar, before denying the ex-Everton and Barcelona player again, saving his goal-bound free-kick.

Watford’s intensity dropped in the second half and they were made to pay when Batshuayi levelled on the hour mark.

But after that they regained control and Gray netted their winner shortly after coming on – finishing with aplomb after Pereyra had found him in space in the middle of the box.

An emotional Heurelho Gomes led the full-time celebrations at Vicarage Road, with the 38-year-old goalkeeper, who is set to retire at the end of the season, perhaps eyeing one last hurrah.

“It’s sensational. I couldn’t ask for more,” Gomes told BBC Match of the Day. “It was amazing today – it was emotional to be honest.

“It has been a great five years here. I am 99% sure I will retire at the end of the season but still 1% I haven’t decided, but that is what I plan for from two or three years ago. I am 38 so I think it is the end of my career here.”