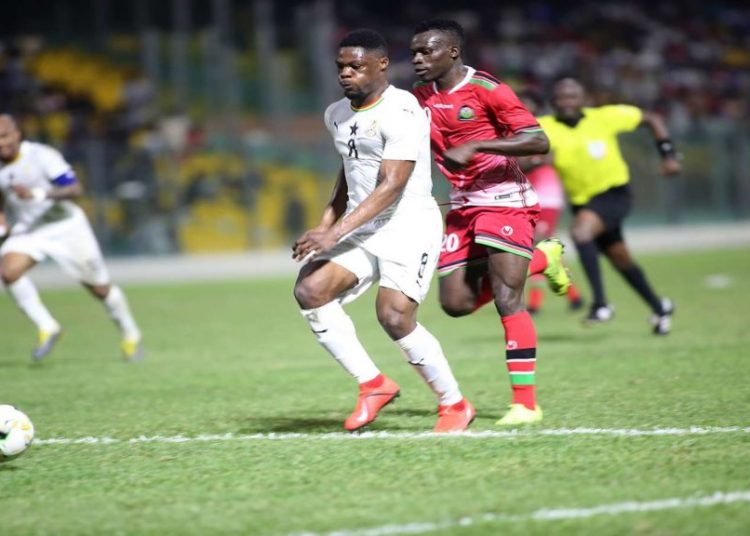 March 23, 2019 will be stay with Caleb Ekuban forever as he came off the bench on his debut Black Stars on his birthday to score the goal that beat Kenya 1-0 in Accra in the final Group F AFCON 2019 Qualifier.

In the 83rd minute, the Trabzonspor forward allowed a pass from midfield to go in front of him and he followed through with a powerful shot that slipped under Kenyan goalie Patrick Matasi.

Until that moment, the Black Stars did not look like finding the breakthrough despite a bit more urgency in the second half.

Christian Atsu, Lumor Agbenyenu and Mubarak Wakaso were liveliest Ghanaian players on the field but their efforts were still off the mark.

Ekuban’s goal could have been the second for Ghana had Andre Ayew’s goal in the 33rd minute not been ruled for a foul on Matasi.

After an opening poor 32 minutes, Daniel Opare got a cross right and it found Ayew whose header was saved by Matasi but he spilled the ball and Andre Ayew followed up and tucked it in albeit illegally according to the referee.

In between that moment and the goal from Ekuban, the Stars struggled all game against their own lack of creativity and the discipline of the Kenyan defence.

The only moment that seemed promising came in the 72nd as Atsu and Jordan Ayew combined to release the Newcastle United winger but his shot was off target.

The victory for Ghana sends them to the top of Group F ahead of Kenya even though both teams have made it to the final tournament in Egypt.

However, top spot will now mean being seeded and the possibility of a decent group in the tournament.

Man of the Match: Mubarak Wakaso

Although Christian Atsu ran him close, Mubarak Wakaso was the team’s best player on the day. He gained control of the boat and he gave the Black Stars a base from which things could happen.

His passing was assured and that served as the starting point for the forays going forward.

He was also willing to do the defensive work and he was available to stop Kenyan counter-attacks.