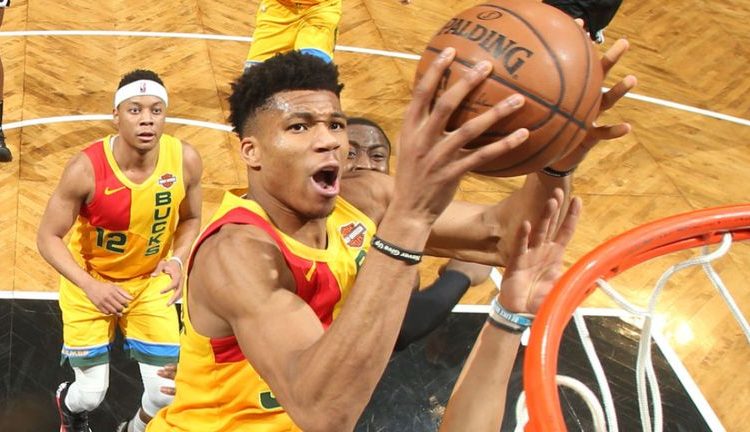 The Milwaukee Bucks went into Monday night’s 131-121 win over the Brooklyn Nets with a skeleton crew as they tried to secure both the top seed in the Eastern Conference and home-court advantage throughout the NBA playoffs.

It was a skeleton crew, however, that included potential NBA MVP Giannis Antetokounmpo, who scored 28 points and pulled down 11 rebounds in 30 minutes.

After sitting out Sunday’s overtime loss at the Atlanta Hawks with a sprained ankle he suffered Thursday against the LA Clippers, Antetokounmpo returned to the lineup against the Nets. Fellow All-Star Khris Middleton was one of several key players for the Bucks who remained out.”Giannis is in, and Khris is out,” Bucks coach Mike Budenholzer said before the game.

“If there’s no specific names, it’s hard for me to list who is in, or who is out.”

Giannis Antetokounmpo, who tweaked his troublesome right ankle while running upcourt after a dunk, said after the game that he felt “good,” but he was walking around the locker room with a significant limp.

Antetokounmpo has repeatedly sprained his ankle recently, with Thursday’s game being the latest example. But after sitting out against the Hawks, he went through an extensive pregame workout here at Barclays Center before Monday night’s game, and was eventually deemed to be in good enough health to play.

“He’s continued to make progress,” Budenholzer said, “and I think the medical staff and Giannis and myself mostly just taking into account how he’s feeling and how he can perform and play.”

Middleton injured his groin warming up for the Hawks game Sunday but also went through a pregame workout in Brooklyn. Budenholzer expressed optimism he wouldn’t miss much more time.

“[It is] serious enough that he’s not playing tonight, and then beyond that I think it’s something we’re confident is very, very short term, and won’t be an issue,” the coach said.

Several of the other injured Bucks, however, won’t be back anytime soon. Mirotic is out for several weeks with a fractured left thumb, as is Gasol with a left ankle injury. A plantar fascia tear will have Brogdon out until sometime during the playoffs, while DiVincenzo is out for the season.