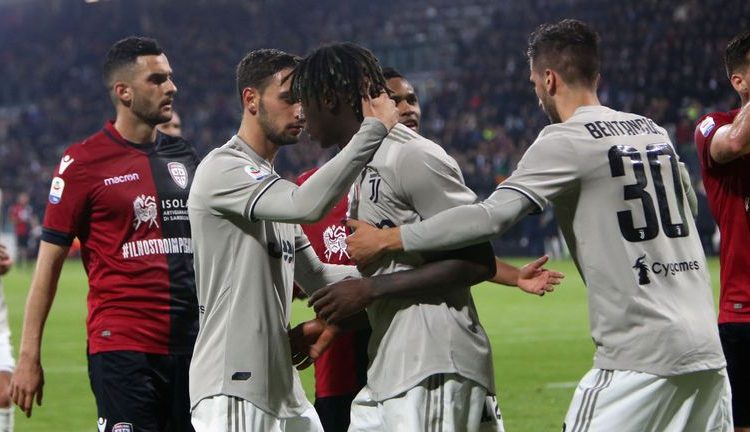 Juventus forward Moise Kean was subjected to racist abuse from the stands as the Serie A leaders won 2-0 at Cagliari, but the 19-year-old took a stance of defiance after scoring a late second goal.

The Italy international was abused all night by sections of the home support, with monkey chants aimed at him, but had the final say by netting Juve’s second goal with five minutes left.

The teenager stood at the post, his arms aloft in response to the chants.

Juventus manager Massimiliano Allegri felt that the teenager should not have responded to the racist chants – but called for the “idiots” responsible to be handed lifetime bans.

“He shouldn’t have celebrated in that manner,” he said. “You need great intelligence to deal with these situations and should not go to provoke people. That, of course, does not mean the idiots in the crowd and the way they reacted should be justified.

“We need to use the cameras, find those who are doing it and punish them. It’s very simple, identify them, and not one-year ban or two, just give them a lifetime ban.

“We’ve got the technology, it can be done if the authorities want to. The problem is, they don’t really want to.”

Juve team-mate Leonardo Bonucci also said after the match his team-mate should not have provoked the home fans.

The defender said: “There were racist jeers after the goal, Blaise heard it and was angered. I think the blame is 50-50, because Moise shouldn’t have celebrated like that, and the Curva should not have reacted that way.

“We are professionals, we have to set the example and not provoke anyone.”

Juventus players, led by captain Giorgio Chiellini, had protested to referee Piero Giacomelli, who was also in conversations with both managers.

Cagliari skipper Luca Ceppitelli went over to the fans behind the goal, appealing for the chants to stop, while France midfielder Blaise Matuidi appeared to gesture to Allegri to take his players off.

When play did continue, an announcement went out over the public address system to highlight the issue, which was greeted by more jeers from some home supporters before the final whistle came after five minutes of added time.

The incident came eight days after England players were subjected to racist abuse during their Euro 2020 qualifier in Montenegro, and on the day UEFA president Aleksander Ceferin insisted referees would be told to be “brave” and halt matches to stamp out such abuse from “loud, aggressive and primitive” people.

Kean, whose goal added to Bonucci’s towering header in the 22nd minute, was handed a start by Allegri at the Sardegna Arena with Mario Mandzukic laid low by illness.

He had impressed when finding the net against both Finland and Liechtenstein for Italy, before then following it up with the winner over Empoli after coming off the bench.

In the other Serie A match on Tuesday, AC Milan drew 1-1 with Udinese.