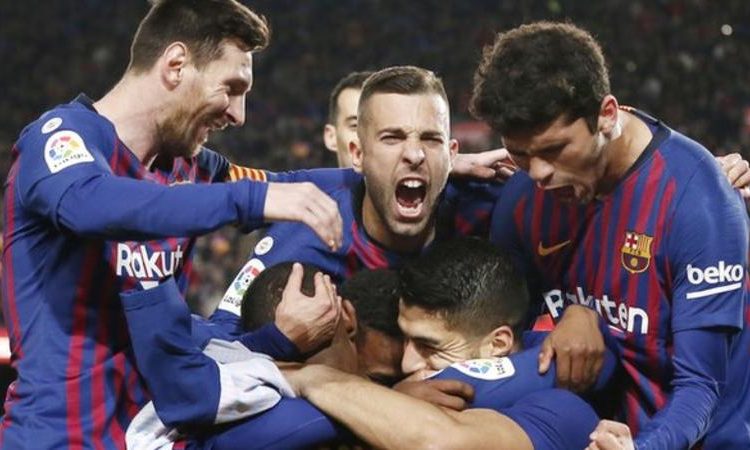 Barcelona moved 11 points clear at the top of La Liga after two late goals ended the stubborn resistance of Atletico Madrid, who had Diego Costa sent off in the first half.

And Suarez and Messi made Atletico pay.

For most of the game, it looked like Atletico goalkeeper Jan Oblak would be the hero to counteract Costa’s villainy, making a string of superb saves to keep Barca out.

But with five minutes remaining, former Liverpool striker Suarez bent in a low shot from 25 yards that beat the Slovenian keeper and flicked in off the base of the post.

Just 60 seconds later, Messi was played though down the right, cut inside two defenders and beat Oblak with a low shot for his 33rd league goal of the season.

Diego Simeone’s side were once again superbly organised, and had to be after Costa’s latest moment of ill discipline. Apparently angered by Manzano’s decision not to play an advantage, the Spain international confronted the referee and was shown a straight red card.

Several players were involved in an ensuing altercation, with Gerard Pique eventually ensuring that Costa left the field.

“I asked the referee and he told me Costa said something to him,” Simeone said. “Other players have said things and not been sent off but that does not justify what Costa did.”

Left-back Jordi Alba had already hit the post after a glorious pass from Messi, and Oblak kept out Philippe Coutinho, Messi and substitute Malcom in another fine display. He eventually made eight saves.

Atleti’s one good chance came as Rodrigo headed a free-kick over with 15 minutes left. But Suarez and Messi then struck to leave Simeone’s side seemingly in a race with city rivals Real for second place.

Messi has now won more La Liga games than anyone in history – moving ahead of former Real keeper Iker Casillas on to 335 victories.