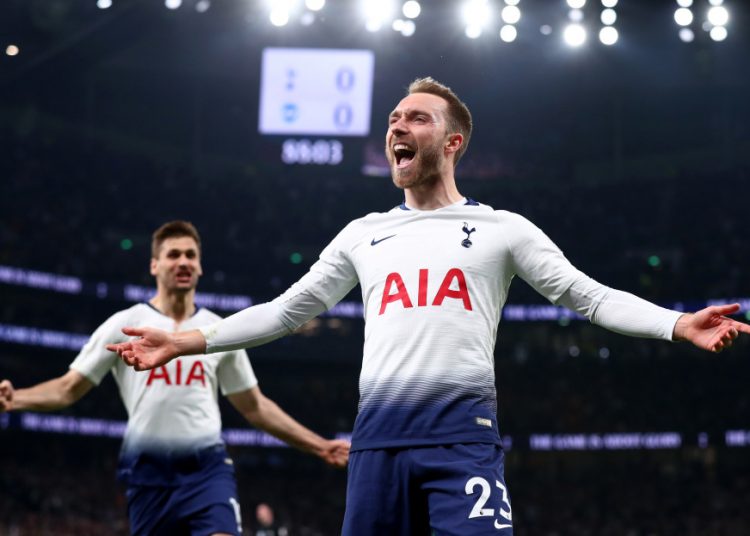 Despite dominating possession and enjoying the best chances of the game, Spurs could not find a way past Brighton and Hove Albion.

However, with two minutes left to play, Eriksen was not closed down on the right-hand side of the box and drove the ball into the corner past the despairing dive of Mat Ryan.

The victory moves Mauricio Pochettino’s third-place side three points clear of Chelsea after their draw against Burnley on Monday night.

As for the visitors, Chris Hughton set his side out not to lose and perhaps were unlucky not to nick a point for their sterling defensive efforts.

The Seagulls remain 17th in the table, just three points above Cardiff, who are one place below them, with three matches left of the season.

It was clear that Brighton had not come to play an expansive game and with Spurs starting all of their fit and available big guns it soon became an exercise in home attack versus away defence.

But the hosts were never going to find it easy to search for a way through the 11 Brighton men behind the ball and clear-cut chances were proving difficult to come by in the opening 45 minutes.

They were denied by some heroic defending in the 20th minute as Lewis Dunk blocked Jan Vertonghen’s low shot, with a goalmouth scramble ensuing while they peppered Mat Ryan’s goal with long-distance efforts as Vertonghen, Eriksen and Lucas Moura all teed off.

Spurs did find themselves susceptible to a rare Brighton counter attack as Florin Andone charged down Toby Alderweireld’s attempted pass just outside his own penalty area and raced the entire length of the pitch only to be stopped by a fine Danny Rose tackle.

Pochettino’s men could have gone at half-time in front had it not been for a great Ryan save.

Alli superbly controlled Kieran Trippier’s clever ball in but Ryan got fingertips to his instinctive left-footed shot, with Shane Duffy in the right place to clear things off the line.

Spurs upped the ante after the restart and set up camp in Brighton’s half as the search for the opener resumed.

Again clear opportunities proved elusive as Brighton defended for their lives and it was long-distance efforts that provided the most threat.

It was incessant Tottenham attacking and they finally began to get closer as the woodwork denied Alderweireld as he shot on the turn from a corner before Alli blazed over from a good position.

Hueng-min Son, so often the hero for Spurs when they need a goal, then screwed an effort just wide as there was no let-up for Brighton.

Alderweireld had another effort deflected while Eriksen tested Ryan as it looked like Spurs were going to be held to their first goalless draw in 68 games.

Aduana vs Medeama: Fire meets color in this “Betway Derby”

Aduana vs Medeama: Fire meets color in this "Betway Derby"