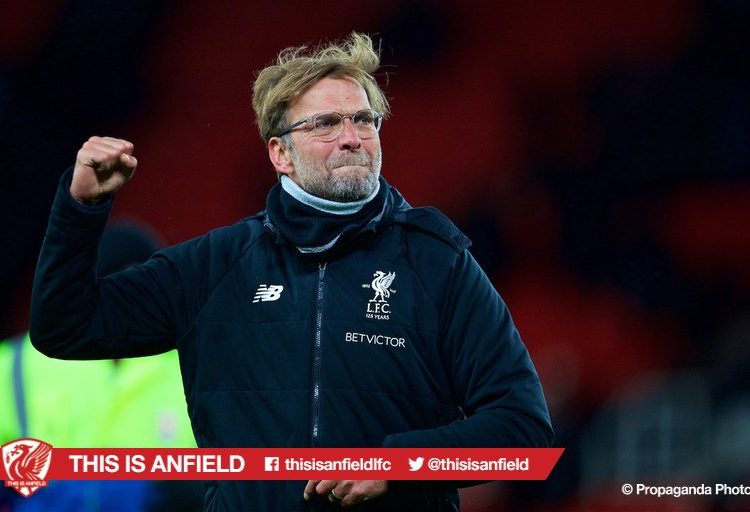 The Reds take on Huddersfield on Friday night with victory seeing them overtake Man City once more at the top of the table, with Pep Guardiola’s side visiting Burnley on Sunday.

With City having defeated Man United in midweek this is far from the ideal situation for Liverpool, needing a slip-up from their rivals to have any hope of lifting the trophy on May 12.

But for Klopp, it remains a vital opportunity, as he urges his players to fight until the final day and supporters to keep faith, telling those who do that they are “welcome to my club.”

“Everything is still fine and if somebody doesn’t believe any more then I can’t change that now. If you still believe then welcome to my club,” he said.

“So far [the players] listen to what I say and believe what I say.

“There is only one opinion that is really important and that is our opinion inside the dressing room.

“We had to deal with everything during the season and the boys did brilliantly.

After Huddersfield, Liverpool travel to Newcastle on May 4 before the visit of Wolves eight days later, with the small matter of a Champions League semi-final against Barcelona to contend with too.

The hope will be that by the time the Reds head to Tyneside they will have control at the Premier League summit, and this is what Klopp is looking to maintain.

He added that “there is always hope until the last whistle of the last game,” but also that there will be “massive pressure” even if City do drop points, with it “not allowed for us to lose concentration or focus now.”

And in assessing City’s hopes at Turf Moor, he acknowledged that, perhaps unlike United, Burnley—who are unbeaten in their last four games, winning three and drawing 2-2 at Chelsea last time out—will prove a difficult test.

“Is Burnley a place that I would love to have now on the schedule for us? No, honestly not,” he said.

“It is not a place where you think: ‘Oh nice, we are going to Burnley. Easy points.’

“It is a tough place to go and they are in a good momentum. They are used to that style of play. They have got 40 points now and that is good.”

But rather than being resigned to clinging to other sides to decide the title race, Klopp’s overriding message is for Liverpool to simply get the job done as best as possible.

“We just have to be focused,” he concluded.

“For others it is really hard, like intense, to separate it, but for us it was not a problem. That is what we have to do again and then we will see.

“There is so much good advice I could listen to—rest players here, don’t focus on the Champions League, do this, do that—but they are from people who are not in the situation.

“We just have to play the games and so far it was pretty good. That is what we have to do again.”