The Central African country lift their second title in their history 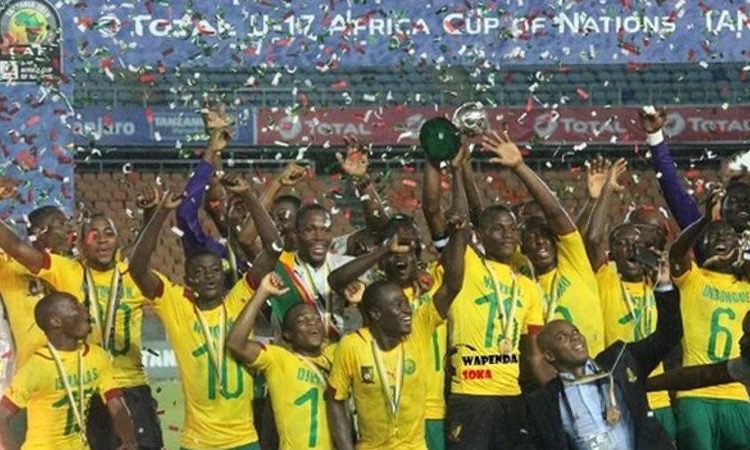 Cameroon won the 2019 U-17 Africa Cup of Nations on Sunday after they defeated Guinea 5-3 on penalties in the final at the National Stadium in Dar es Salaam, Tanzania.

The two teams created decent chances but failed to score as the match ended 0-0 in normal time.

It is Cameroon’s second U-17 Nations Cup title having previously been African Champions in 2003.

Cameroon were sharper during the decisive penalty-kicks and benefitted when Guinea substitute Mohamed Youssouf Sack had his penalty saved by goalkeeper Manfred Mekumba Ekoi.

“I am happy that we have achieved all our goals of qualifying for the World Cup and winning the Afcon title,” said Cameroon coach Thomas Libih.

Cameroon, who also defeated the Syli Cadets of Guinea 2-0 in the group stage, are the only team to complete the tournament unbeaten.

They began with a group win over Guinea before defeating Morocco 2-1 and ended the group phase with a goalless draw against Senegal.

Cameroon went on to win 4-3 on penalties against Angola at the semi final stage, despite being down to 10-men.

Amongst those watching Cameroon’s triumph was head coach of Tanzania’s senior team, Emmanuel Amuneke, one of the members of the Confederation of African Football’s (Caf) technical team.

Amuneke, who coached Nigeria’s U-17 team to World Cup success in 2015, was impressed with the overall standard of play at the tournament.

“I think standards have improved generally and this is good for Africa because it shows that we have players for the future,” the former Nigeria international said.

This was Guinea’s best showing at the continent’s U-17 showpiece event, finishing as runners-up for the first time.

Guinea will join Cameroon and the losing semi-finalists Nigeria and Angola at this year’s U-17 World Cup in Brazil.

However, Guinea are still waiting to hear what Caf’s disciplinary Committee will decide after Senegal and Nigeria both protested that Guinea had used ineligible players.

If the decision goes against Guinea, the Syli Cadets could lose their World Cup place.