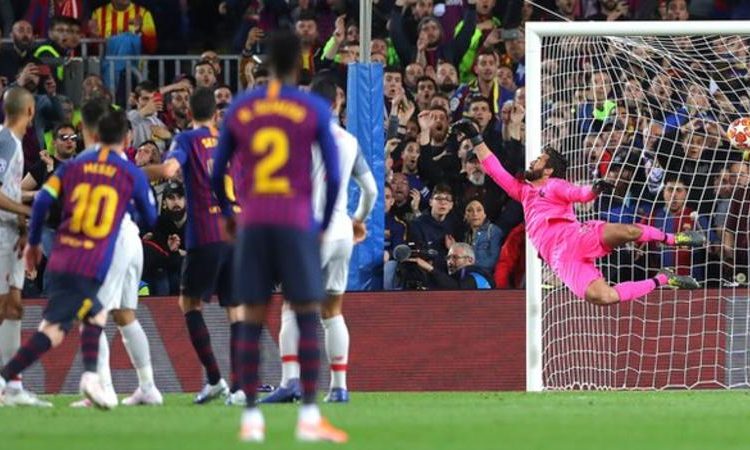 Lionel Messi’s two second-half goals – including a stunning free-kick – earned Barcelona a handsome advantage and left Liverpool with an almighty task in their Champions League semi-final.

The Reds were in the ascendancy despite going behind to Luis Suarez’s first-half strike – but they were then hit by a double sucker-punch from the Barcelona number 10.

The Argentine forward’s first was instinctive, as he followed up Suarez’s shot that came off the bar, but the second was majestic as he found Alisson’s top-right corner from 25 yards out. That was his 600th goal for the Spanish giants.

Liverpool came agonisingly close to a potentially crucial away goal when Roberto Firmino’s strike was cleared off the line, before Salah somehow struck the post rather than scoring with the follow-up.

Barcelona’s Ousmane Dembele should have put the tie out of the Premier League side’s reach in the closing seconds, but he scuffed it straight at Alisson from a few yards out.

Reds out of luck at Nou Camp

What more could Klopp ask of his men in the second leg on Tuesday after a display where they constantly probed and pressured the competition favourites?

Maybe some luck could have gone their way. Sadio Mane, with 15 goals in his past 18 games, shot well over from eight yards out after he was found by Jordan Henderson’s ball from the right in the first half.

And in their period of domination after the interval, Ter Stegen was at full stretch to push away Milner’s shot before the German dived low to his right to make a one-handed stop from Salah’s drive.

Liverpool refused to let their heads drop after Messi’s mini-show. However, they must have thought the gods are not shining on them this year after both Firmino and Salah missed clear-cut chances you would have put money on them to score.

The Reds have been known to produce miracles with a 3-0 deficit. They will need to produce another next week.

This was the La Liga champions at their most fluid – a supreme example of unpredictable, attacking football with the frontline of Messi, Suarez and Philippe Coutinho all on the same wavelength.

Perhaps more importantly for coach Ernesto Valverde, his defence – disjointed at times against Manchester United in the last eight – was far more resolute against a more fearsome attack.

After a period of pressure, they took the lead in the 26th minute when Suarez ran in behind Joel Matip and steered in Jordi Alba’s excellent diagonal through-ball.

The Catalan side conceded possession after the break but, bar those two efforts from Milner and Salah, looked comfortable – before Messi relieved the pressure on his backline with two goals in a seven-minute spell.

His opener came slightly fortuitously to him after Suarez tried to capitalise on Matip’s unintended through-ball.

That was goal number 599 for the club, so it was only fitting that the next one was something special – a free-kick that looked to be heading for the top corner as soon as it left his boot.

Substitute Dembele should have put the tie completely beyond the Reds but, like Mane, lacked accuracy with the goal in front of him.