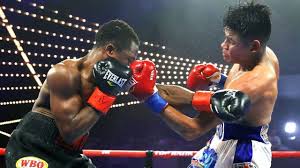 With talk of a possible unification bout with Danny Roman on the bill if he beats Dogboe in the rematch scheduled for May 11, the Mexican insists he is not thinking beyond the bout against Dogboe, although he admits he likes the sound of a unification bout.

“The truth is that I am super motivated and I have spent my time getting ready for the rematch with Dogboe who has revenge on his mind,” he said.

“Of course, I think of Danny Roman and now that there is no unified champion, I would like to opportunity to go for the belts.

“For now, I cannot say about anything about a bout between Roman and me but we will see what happens in the future,” he added.

Navarette’s opponent, Dogboe, has been camping in his native Keta in preparation for the bout, and is brimming with confidence, declaring a round four knockout victory in his favour.