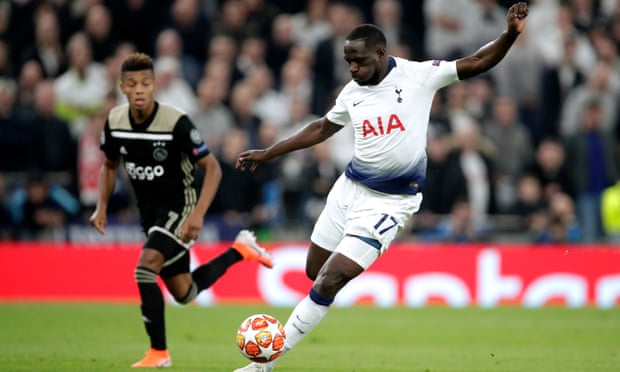 Moussa Sissoko believes Spurs cannot be counted out after fighting back to get out of their group and beat Manchester City in the quarter-finals. Photograph: Soccrates Images/Getty Images

Tottenham stared at elimination in every match during the second half of their Champions League group phase campaign only to find late goals against PSV Eindhoven, Internazionale and Barcelona – in that order – to keep the dream alive.

It was a similar story in the quarter-final against Manchester City. Mauricio Pochettino’s team were out with 17 minutes of the second leg to play at the Etihad Stadium, as they trailed 4-3 on aggregate, but Fernando Llorente would find another away goal and, when the VAR gods smiled on them in stoppage time, ruling out a Raheem Sterling winner, they could savour a gutsy away-goals triumph.

In short, this is a group of players who do not know when they are beaten. It is an attitude that gives them hope and belief as they consider the 1-0 semi-final, first-leg deficit inflicted upon them by Ajax at the Tottenham Hotspur Stadium on Tuesday.

“I believe we will go to Amsterdam and come back with qualification because I know the quality of this team,” said Moussa Sissoko, the midfielder. “We have a lot of character. I think it would be foolish to write us off. We have proven that a lot of times this season.

“With 1-0, a lot of things can happen. Look at when we played Manchester City in the second game. In the first 20 minutes, there were five goals. Who would believe that? No one. So hopefully, when we go to Amsterdam, we will score a lot of goals and get the qualification.”

Lucas Moura scored the 85th-minute equaliser at Barcelona that allowed Spurs to advance into the last 16, where they beat Borussia Dortmund 4-0 on aggregate, and the forward also sets great store by the team’s previous heroics.

“The spirit against City was unbelievable and we need to play like that,” Lucas said. “We were strong mentally and now, we need to do the same. It’s still open, it’s not finished. We need to believe – to go there and fight. We can do a good game and we can win.”

One thing is clear. Spurs cannot play in Amsterdam as they did in London, particularly in the first 30 minutes or so, and hope to get away with it. During that period they struggled to lay a glove on their opponents, whose superiority was so pronounced as to be frightening. Ajax toyed with Spurs, with Donny van de Beek, the attacking central midfielder who scored the goal on 15 minutes, the tormenter-in-chief Perversely, Spurs gained a foothold after the setback of losing Jan Vertonghen to a horrible-looking clash of heads in the 39th minute. Pochettino had switched from his starting 3-3-2-2 formation to a 4-4-2 midfield diamond on 29 minutes and now, with Sissoko on for Vertonghen and driving up the right, Spurs were able to press more effectively. Even so, they struggled to create clear-cut chances.

Did Pochettino get his tactics wrong at the outset? His starting system was heavy on attacking players in central areas, which made it hard for the team to keep their defensive shape, and there were not enough options or threats in wide areas. It should be said that Harry Kane and Son Heung-min were missed, as was Harry Winks and his ability to move Spurs forward from midfield.

Why did Sissoko start on the bench? “It was the choice of the manager,” he said. “At the same time, I’ve only just come back from injury [he hurt a groin at City on 17 April]. I had one training session and that was on Monday so it was risky to start. The manager made his choice and we need to accept that.”

Pochettino said he was unhappy at his players’ lack of energy in the first 30 minutes and it sounded as though he gave them a verbal rocket at half-time.

“We gave them too much space and the coach said that in the changing room,” Lucas said. “Was he angry? A little bit. He spoke to us, he did some changes. I cannot say everything because it’s personal [private]. Were voices raised? Yes. You know Mauricio. He loves to touch our minds and to motivate. That’s why we changed in the second half and played much, much better.”

Spurs have been left to cling to various hopes. They know that Ajax have been more ruthless away than at home in this season’s Champions League and Son’s return from suspension will be a tonic. Yet Tottenham were considered to be the underdogs before the second leg at City – and that was with a 1-0 lead. Nobody is under any illusions about the scale of the challenge.