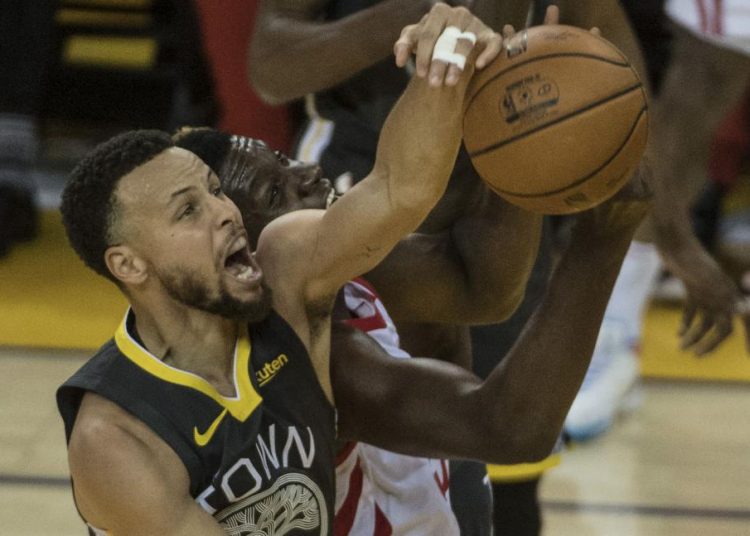 Golden State Warriors superstar Stephen Curry went through all of Thursday’s practice and is expected to play in Game 3 after dislocating the middle finger of his left hand during Tuesday’s 115-109 Game 2 win over the Houston Rockets.

“He practiced fully,” Kerr said. “He’s got it taped up, but it’s probably good that we’ve got a few days off. So hopefully the pain will continue to go down as we get closer to game time.”

Curry initially injured the finger in the first quarter of Game 2 while trying to knock the ball away from Rockets center Clint Capela. X-rays taken immediately after the injury came back negative, and Curry returned to the game, scoring 20 points in 33 minutes.

Curry, who had his middle finger and ring finger taped together while going through his normal post-practice shooting routine Thursday, like he did during Game 2, did not appear to be in pain while taking shots.

“It’s not that fun,” Warriors swingman Klay Thompson said of having a dislocated finger. “But I know Steph, he’ll get it back. A dislocated finger, it sucks, but luckily you can pop it right back into place and it’s not the end of the world. It’s not like he tore ligaments or anything, so he’ll tough it out.”

Thompson and the Warriors flew to Houston on Thursday afternoon and will practice in Houston on Friday in advance of Game 3 on Saturday night. The Warriors lead the seven-game series 2-0.

With Curry’s finger injury, as well as his own ankle injury, Thompson said he knows it will be a challenge for the group to win in Houston, but they understand just how big it would be to close the series and get some time off while waiting for the winner of the other Western Conference semifinal between the Denver Nuggets and Portland Trail Blazers.

“It’s huge,” Thompson said. “I’ve said it before that it’s very important. But just like in life, it’s a lot easier said than done. Any rest is always great rest, but at the end of the day, if we have to play a couple more extra basketball games life is still good, and it’s fun to play, so it could be worse.”

The good news for the Warriors heading into Game 3 is that Draymond Green’s technical foul from Game 2 was rescinded by the league on Wednesday. That leaves the emotional forward with three for the postseason. Seven technicals in the postseason forces an automatic one-game suspension.

Green echoed Kerr’s sentiments from before the Rockets series started, saying that he would also be in favor of a rule change so that teams that play deep into the postseason could have their technicals potentially reset after a series, instead of having them accumulate throughout a playoff run.