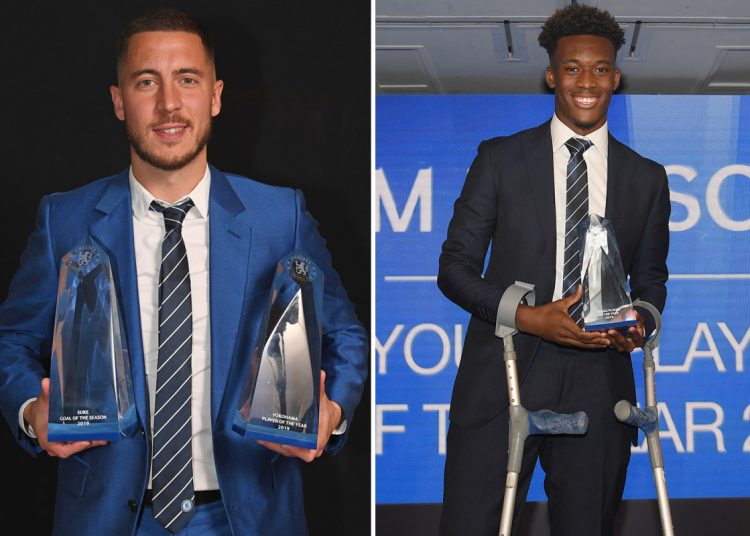 Eden Hazard has won a hat-trick of accolades at Chelsea’s awards ceremony, claiming the prize for Chelsea Player of the Year, Players’ Player of the Year and Goal of the Season, making Blues history in the process.

He has also won the main prize – Chelsea Player of the Year – for the fourth year running, breaking another club record.

No Blues player has recorded more goals or assists than the Belgian, who has scored 19 times and assisted 16 more in 50 appearances across all competitions.

He also has the highest combined total of goals and assists – with 16 and 15, respectively – in the Premier League so far this season, while also ranking highest in the division for chances created, successful dribbles and touches in the opposition box.

The 28-year-old earned the club’s Goal of the Season award for his incredible match-winning, solo strike against Liverpool at Anfield in the Carabao Cup.

Hazard’s phenomenal goal saw him lift that accolade for the third time in his Chelsea career and his Players’ Player of the Year was his second in a Blues shirt.

Aside from the Belgian, Callum Hudson-Odoi picked up the Young Player of the Year award as the teenager showcased glimpses of the stand-out talent that made him such a sought-after prospect in the January transfer window.

There was also time taken to commemorate the service of central defender Gary Cahill, who is set to leave the club after seven-and-a-half-years at Stamford Bridge, with fellow defender Cesar Azpilicueta speaking about the former Bolton Wanderers man’s contribution to the Blues.