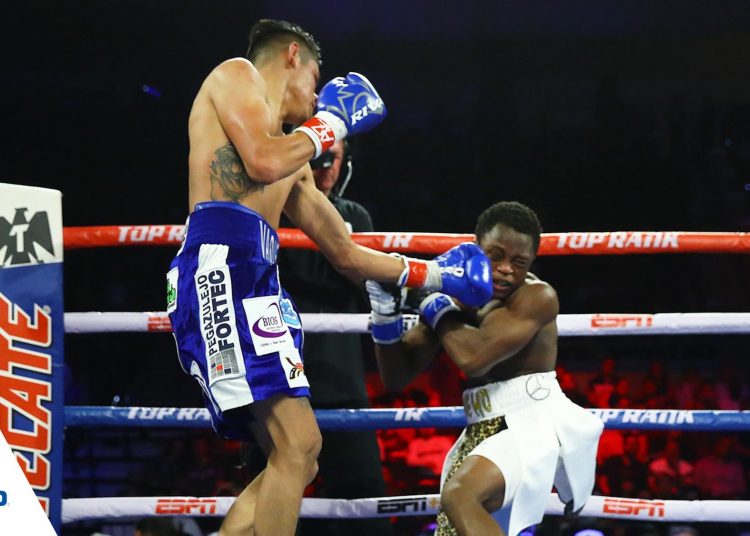 Ghana’s Isaac Dogboe suffered a technical knockout to Emmanuel Navarrette of Mexico as he sought to recapture his WBO Super Bantamweight title.

Dogboe’s corner threw in the towel at 2:02 of the 12th round to save the boxer from further punishment.

Dogboe started well in the first with some attack-minded boxing but soon, Navarette found his feet and used his reach and jab to find some rhythm in the sexond.

From that point, the Mexican turned the screw every time Dogboe  felt he could come back.

Dogboe started to wobble as early as the 6th round and by the 8th, he suffered his first knockdown but he beat the referee’s count.

Dogboe tried hard to make it a contest but Navarette’s counterpunching, reach and skill kept Dogboe at bay and kept the bout in his favour all night. Add the cut to Dogboe’s right eye and there was a lot for the Mexican to use as advantages.

Finally, in the 12th round, Dogboe’s corner decided it was enough and threw in the towel to end the bout.

What the boxers said:

Dogboe: “I thank God for this bout and I thank Team Navarette for the chance. I give hats off to him for a great job and I can only say well done to him. I will move up to 126-pound division. I will be more comfortable in that weight class”

Statement made. Navarrete seemingly hurts his right hand, knocks down Dogboe and Dogboe's corner throws in the towel. #NavarreteDogboe2 pic.twitter.com/9IAxvwRa8Z