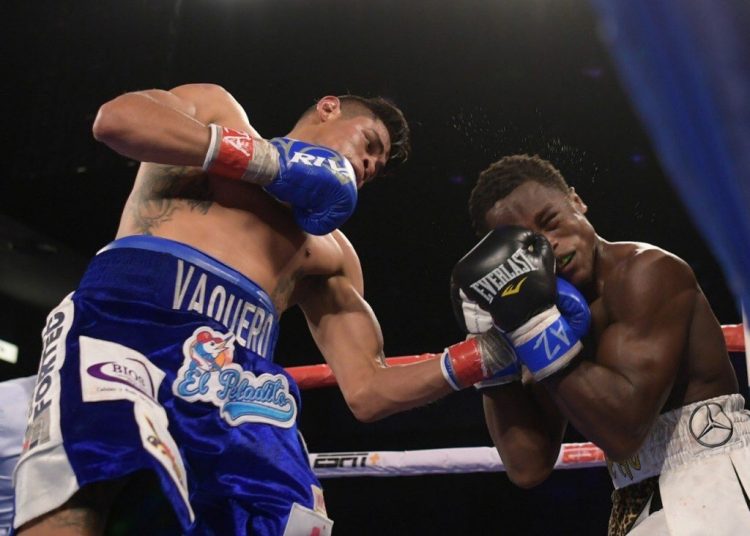 This is certainly not how things were supposed to play out for Isaac Dogboe. A wonderful journey in 2018 which saw him capture and retain the world title ended in despair as Mexican Emmanuel Navarette dominated and defeated him to claim the title.

Dogboe had to make a return. He needed to prove himself after that disappointing loss, but was agreeing to fight Navarette again the smartest decision?

Boxing is one funny sport. You may be the most skilled and talented fighter, but one of the key ingredients in becoming a great is choosing your opponents wisely.

The most used excuse by Team Dogboe when he lost his WBO Super bantamweight title to Emmanuel Navarette was the Ghanaian’s lack of fitness.

According to them, a combination of poor preparation, illness, and the absence of his head trainer and father before the first bout was the reason for his poor display.

But they were wrong. Understanding the problem is the first step of finding the solution, and Team Dogboe got that wrong.

Yes, maybe fitness played a role, but the most telling and standout point was the tactical strategy and approach, coupled with the physique of both fighters.

Dogboe’s strengths were naturally negated by Navarette’s physique, and he was going to be beaten by the Mexican 9 times out of 10, whether fit or not.

The height and reach advantage for Navarette made it too easy for him to ward off the threat of Dogboe, while at the same time punishing him at will.

Despite all these glaring flaws in Dogboe’s game, his team decided to take the huge risk of accepting the rematch at such a pivotal moment in the young boxer’s career.

The unforgiving nature of boxing is such that one high profile loss, and getting back could be like starting all over ; two, and your career could most certainly be ‘over’.

The Ghanaian was his usual confident and corky self in the days leading to the bout, going as far as predicting a round 4 KO victory. His chants of Neho! (his war cry) as he walked into the ring filled most Ghanaian boxing fans with confidence, but sadly what happened next was far from war. It was a one-sided beating, similar to the battle of Winterfell before Arya struck.

Statement made. Navarrete seemingly hurts his right hand, knocks down Dogboe and Dogboe's corner throws in the towel. #NavarreteDogboe2 pic.twitter.com/9IAxvwRa8Z

It was simply painful to watch for any Ghanaian. Almost a repeat of the first bout, the only difference being the change of costumes. Dogboe was punished by Navarette virtually from start to finish, with the Mexican scoring a knockdown in round 6.

Dogboe’s vision was blurry due to a bad cut on his left eye, his legs were wobbly, not because of the ‘lack of fitness’ this time, but his inability to cope with the pressure that was being mounted on him.

His corner, in the first bout, allowed him to go through the punishment through to the final round. But this time it was too hard to take, as they threw in the towel in the 12th round to end the torture.

Utter disappointment for a country that was hoping to have two standing world champions.

Suddenly, Team Dogboe is now staring at back to back world championship defeats, and it is difficult to see a way forward.