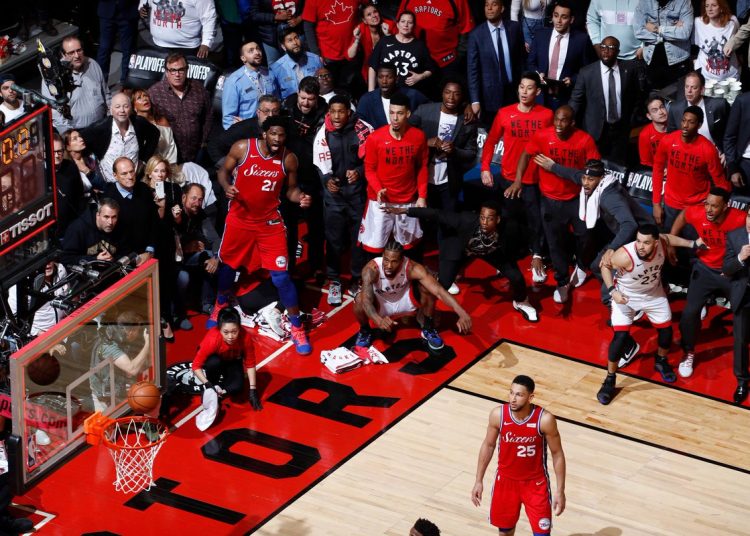 Raptors forward Kawhi Leonard made the first Game 7 buzzer-beater in NBA history after his fadeaway jumper bounced four times on the rim before falling through the net as time expired in Toronto’s 92-90 win over the Philadelphia 76ers.

“It was great,” Leonard said. “That’s something I never experienced before — Game 7, winning shot. It’s a blessing to get to that point and make that shot and feel that moment, and it’s something I can look back on in my career.”

With the game tied 90-90 and 4.2 seconds remaining, the ball was inbounded to Leonard, who was guarded by 76ers guard Ben Simmons. As Leonard dribbled along the right side of the perimeter, Sixers center Joel Embiid pursued him along the right sideline. With less than a second remaining in regulation, Leonard elevated in the right corner over Embiid’s outstretched arm and launched the shot.

“We ran a similar play in the [Orlando] Magic [first-round] series, and I ended up just catching and shooting the ball,” Leonard said. “Embiid was guarding me. He’s taller and longer than me, so I ended up finding a spot that I work on, and I just knew that I had to shoot it high.”

The final horn sounded as the ball reached its apex before caroming off the rim several times. As it did, Leonard squatted in the right corner, tongue between pursed lips, awaiting the shot’s fate. After the ball bounced through the iron, Leonard rose with his arms in the air and let out a scream before being rushed by teammates.

“It was crazy,” Raptors guard Kyle Lowry said. “It was one of those moments where it’s just like a real-life game winner, Game 7, like, count it down when you’re back home, and everyone was celebrating like that. It was a pretty awesome moment.”

The decisive shot was the final basket of a historic night for Leonard, who scored a game-high 41 points, and only the second buzzer-beater in a winner-take-all game in the postseason, after Michael Jordan’s iconic shot to defeat the Cleveland Cavaliers in the first round of the 1989 Eastern Conference playoffs. Leonard’s 39 shot attempts on Sunday are second to only Elgin Baylor’s 40 in 1962 as the most in an NBA Game 7.

The Raptors next travel to Milwaukee for the Eastern Conference finals. They face the top-seeded Bucks in Game 1 on Wednesday.