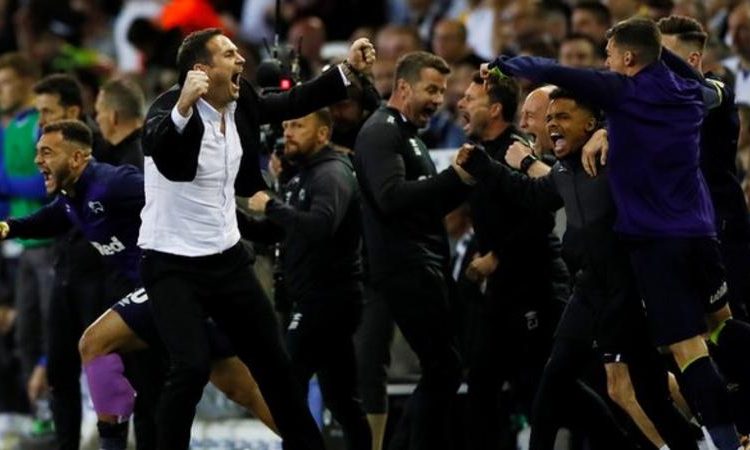 Substitute Jack Marriott was the hero as Derby stunned Leeds 4-2 to set up a Championship play-off final against Aston Villa after a wild night at Elland Road.

The hosts took the lead on the night to go 2-0 up on aggregate when Stuart Dallas tapped in after Liam Cooper’s header had hit the post.

Marriott levelled with his first touch before half-time after a horrendous mix-up at the back between Cooper and keeper Kiko Casilla.

Frank Lampard’s side turned the tie on its head after the break through Mason Mount and a Harry Wilson penalty, only for Dallas to drift in and fire Leeds back level on aggregate.

Leeds defender Gaetano Berardi was then sent off for a poor challenge on Bradley Johnson before Marriott won it late on with a composed finish.

There was still time for Derby defender Scott Malone to join Berardi in being dismissed after collecting a second booking in time added on.

For Leeds, who finished third in the table, defeat means their spell outside the top flight will stretch to a 16th year.

Derby, meanwhile, become the first team to lose the first leg of a Championship play-off semi-final at home and go on to reach the final meaning Lampard’s first season in management will end at Wembley.