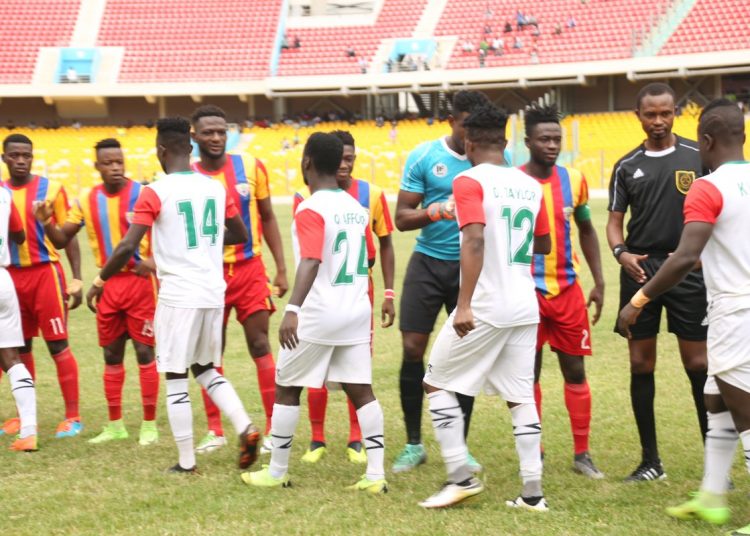 Hearts of Oak became the first side through to the semis of the Normalisation Committee Special Competition after week 12.

Once again seven games were played across Wednesday and Thursday with none of the games ending in a draw for the second straight matchweek.

One major change in this round of games, however, was the performance of the away teams, with less wins from the home sides than those playing away from familiar settings.

Liberty, Elmina Sharks, Bechem United and Dreams FC’s wins away from home contributed to the most successful matchweek for away sides since the competition began.

Only Ashanti Gold, Kotoko and Hearts of Oak managed to keep home fans happy by earning all three points.

For the first time in the competition, a player scored more than two goals in a game (for the same side) and more than three in a game.

Ashantigold’s Shafiu Mumuni was extremely prolific on Wednesday at both ends of the pitch.

He ended the game with a hat-trick for his side while also netting an own goal in their 4-1 win over Aduana.

Mumuni was the only player to score more than one goal meaning there were 14 different scorers.

Despite not scoring on Wednesday, Karela’s Diawisie Taylor remains the top scorer with eight goals, one more than Kotoko’s Fatawu Safiu who also drew a blank.

Inter Allies have had a hard time keeping the ball out of their net in this campaign. Having let in 19 goals so far, they’ve now conceded two times the number of goals let in by Medeama.

They are also one goal away from having conceded five times as many goals as Kumasi Asante Kotoko. Yeesh!

Hearts’ 1-0 win over Karela put them on 25 points which means they can’t now be caught by Liberty Professionals in third place with 19 points, with two games to play for both sides.

Kotoko (18 points) are now just one point behind Medeama who didn’t play this week but have played the same number of games as the Kumasi club. Ashgold are a point behind Kotoko in third.