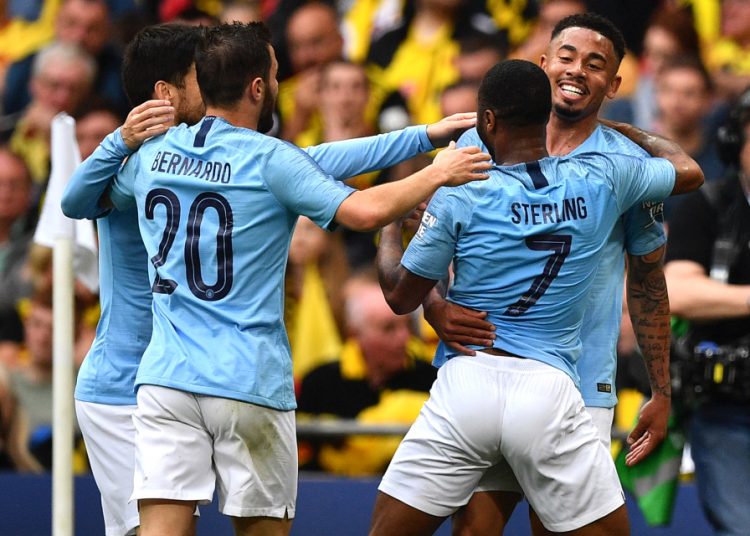 Raheem Sterling scored the first FA Cup final hat-trick since 1953 as Manchester City rounded off an outstanding season by crushing Watford at Wembley to clinch a historic domestic treble.

Sterling was the star of the show as Pep Guardiola’s team became the first English men’s team to achieve the feat of winning the Premier League, FA Cup and Carabao Cup in the same season.

They reaffirmed their status as this season’s dominant force as Watford were utterly outclassed.

Watford’s best chance of over-turning the odds came early on when City keeper Ederson saved at the feel of Roberto Pereyra and they were furious when referee Kevin Friend waved away penalty claims after Vincent Kompany blocked Abdoulaye Doucoure’s shot.

The contest was effectively over from the moment David Silva finished from close range after 26 minutes, Sterling doubling the advantage before half-time by turning in Gabriel Jesus’s goalbound shot.

Watford rallied briefly after the break but were always wide open to the counter attack.

They were brutally punished by an imperious City side, as substitute Kevin de Bruyne scored from Gabriel Jesus’s pass just after the hour before the Brazilian raced clear for another goal shortly afterwards.

Sterling wrote his own name into the history with a treble by scoring twice in the final 10 minutes – turning in Bernardo Silva’s perfect cross before bundling in the final goal of a memorable display from Guardiola’s side.

It was City’s sixth FA Cup triumph and their first under Guardiola, who has now won six trophies since taking over at Etihad Stadium in 2016.

City’s win means Wolverhampton Wanderers, who finished seventh in the Premier League table, will play in the two-legged second qualifying round of the Europa League on 25 July and 1 August.