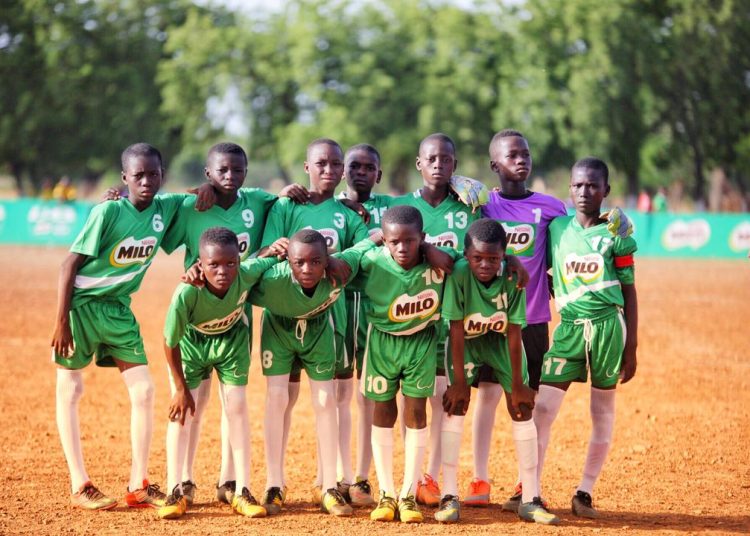 The annual event, which for the past five years now has been sponsored by Nestle Milo kicked off with Zone 1 which includes qualified schools from the five Northern regions in the nation. Thus, Northern region, Upper West Region, Upper East region, North East region and Savannah region competing to book a place in the National Finals of the league.

Sixteen teams assembled for the championship from the five regions in the northern belt of the country.

The 16 teams looking to book 5 slots for the National championship to be staged at the Paa Joe Park in Kumasi later this year.

Day 1 of the competition saw both players and officials taken through soccer clinic led by Milo U13 icon and former Black stars captain, Stephen Appiah.

The soccer clinic football practice focused on developing skills, ball control, dribbling, attacking, defending, shooting and crossing. The soccer clinic also seeks to inculcate in the player Teamwork, determination, focus, respect, confidence and discipline on the field of play and in life.

After enthrilling and mind blowing round of matches in both groups, the Upper West group became the most competitive group as 3 side emerged table toppers with 12 points each but were seperated using goal difference rule

Kundungu needed a draw in their last game of the group after 4 winning streak against Wa Model Primary who needed nothing less than the 3 maximum points to stand a chance of qualifying. Karni also in that group needed to win their final group game to stand a chance of progressing and also had to score many goals as well

Karni record the tournament’s biggest defeat on Tuopare beating them by 9 unanswered goals to progress from the Upper West group. The results meant, Tuopare were the worst team at the competition, conceding 19 goals without scoring to end bottom on the table

Eventual winners of the championship, Tanga Primary school topped the Upper East group with 10 points after 3 wins and a draw in the group

With more still to play for in terms of the zonal Champion, the 5 qualified teams were paired again with one on a bye in the quarter finals of the competition

With 3 teams left in the competition, a coin toss was needed again to determine the sides to play in the one-off semi finals of the tournament

With cash prize, Nestle products and other Milo school supplies up for grabs , it was a competitive and scintillating final as Kaladan primary school seek to the defend the title while Tanga primary school were also on course to write their own history as far as the championship is concerned

All participating teams at the competition were given 25 milo branded exercise books, 30 wristbands, 6 customized Milo footballs, 2 boxes of Chocolim and 30 pencil cases

Second placed side, Kaladan primary school also had cash prize, 8 footballs, 50 wristbands, 50 books, 50 pencil cases and a box of energy cubes to themselves

The championship will move to Zone 2 on Wednesday 29th May 2019 at Sunyani Senior High School where schools from Bono, Ahafo, Ashanti and Bono East Regions will compete for 4 slots for the National Finals.