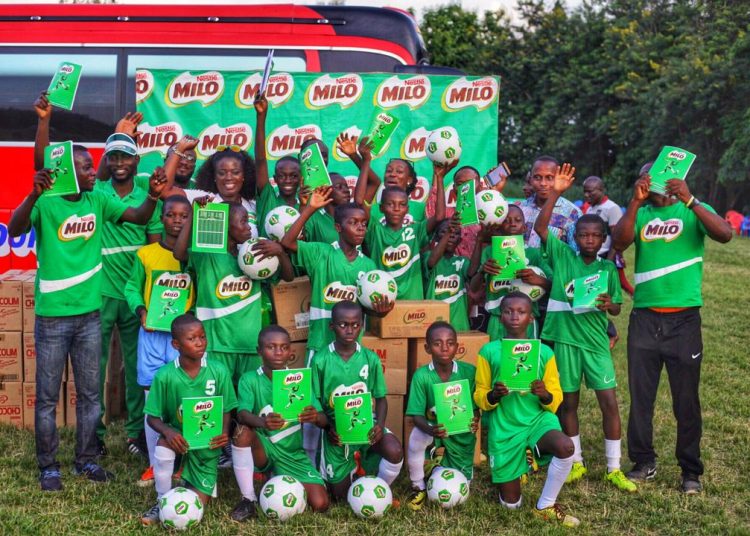 The Milo U-13 train made its stop at Sunyani for the ZONE 2 after thrilling and buzzing activities in Lawra for the ZONE 1 championship that hosted the Northern, Upper East and West, North East and the Savanna Regions.

The championship did not fail to excite as the participating schools turned up in style to grace the 5th anniversary of the competition with Lawra hosting its maiden zonal competition.

ZONE 2 kickoff with 16 participating schools from the Ashanti, Bono, Ahafo and the Bono East Regions competing for a place in the grand finale to be played in Kumasi.

The first day of the competition drew about 600 kids from the non-participating schools for the SOCCER CLINIC; they were taken through fitness tests and drills by the ICON for the competition –  Stephen Appiah at the Sunyani Senior High School Park.

This is aimed at developing their skills on the ball, their movements and most importantly the teamwork which Nestlé hopes to foster among the kids.

The actual competition took off on the second day, the kids showed great talents and potentials as competed in the field of play.

Ashanti Region had 8 competing schools and was grouped into A and B with Bono having 4 while both Bono East and Ahafo were represented by 2 each – they had to play a round robbing game (home and away) with the most wins and goals to go through to the semis.

A total of 14 games were played on the first day, organizers and spectators from the community were thrilled with the sheer quality of talents these kids displayed as there was no shortage of football skills and intelligence.

After the first round of games was played, Amoawi Methodist Primary and Sepe Tinpom M/A-B were winners in their respective groups from the Ashanti Region and had to square it up for who represents the region. Amoawi were too strong for their compatriots on the day as they were 1-0 winners.

They became the first to side from Zone 2 to book their place in the National finals.

Boda R/C Primary followed after emerging as group leaders from the Bono Region after thrashing Abu Bonsra 4-1 in their group decider.

St. Joseph International School proved to be too strong for their fellow regional rivals, Techimantia Methodist. The won 7-1 on aggregate to make it to the semis.

The 4th slot went to Babato Kuma Primary from the Ahafo Region after beating Ateco Demo Primary 2-0 on aggregate to advancement to the National Finals.

After the pairing was done, it was Amoawi against St. Joseph – the final before the actual finals as it was tagged by spectators then Babato Kuma against Boda R/C in the second semi-final game.

The first semi-final game was everything spectators wished for, great game, quality football techniques from the kids. They entertained the fans but it was St. Joseph who narrowly edged out their opponents with a lone goal scored in the second half by their wonder kid, Mark Aboagye.

The winner of the second semis had to be decided through the shootout as Boda R/C and Babato Kuma played out a 1-1 draw game – but it’s was Boda that emerged as winners from the spot kicks with a 4-2 win.

Then there came the finale of ZONE 2 to decided the Zonal champions.

It was St. Joseph from the Ahafo Region and Boda from the Bono Region.

With little or no surprise, it was St. Joseph International School that were crowned Zone 2 champions but there were made to sweat for it by Bada who defended gallantly. A super sub, Israel Kofi Sarfo decided the winner when he was introduced midway in the second half.
 
AWARDS
Fair Play – Nsoatre Presby Primary