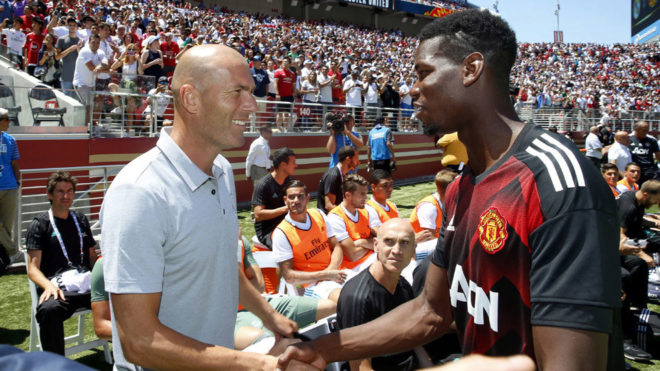 Real Madrid have already completed the signings of Eden Hazard and Luka Jovic, and with Ferland Mendy all but confirmed, the club will now turn their attention to Paul Pogba.

A midfielder is needed by Madrid and with Zinedine Zidane determined to bring his compatriot to the Estadio Santiago Bernabeu, the club are supporting him, despite their initial doubts.

MARCA have learnt that the club has conceded to their coach and will do all it takes to take Pogba from Old Trafford this summer.

Los Blancos are happy to grant Zidane one of his biggest wishes but signing the midfielder won’t be easy. Manchester United won’t let him leave for anything under 150 million euros, which is a figure that Madrid see as excessive and, as things stand, aren’t happy to reach.

Christian Eriksen and Donny van de Beek were presented as alternatives, but the French coach was clear in explaining that he only wants the 26-year-old and nobody else will suffice.

Zidane is now reliant on Pogba’s desire to play under him and to do so he’ll need to lower his salary. In turn, Madrid would be willing to offer him a lengthy contract, possibly as long as a six-year deal.

Pogba wants out of Old Trafford, which Madrid know, and he’s happy to pressure his club to allow the move to happen as he’s not happy with the direction of the project in Manchester.

In order to persuade Madrid that the World Cup winner would be a worthwhile signing, Zidane managed to convince them that he would add competitiveness, leadership and bring a good atmosphere to the club. Pogba also speaks Spanish perfectly thanks to his wife being Bolivian, so adaptation would be less of a problem both in the dressing room and his personal life.

On the pitch, his talents are clear. He would bring goals to the club and offer an x-factor that isn’t currently present.

Mino Raiola would be the man in charge of the move and, in spite of his FIFAban, he would carry out the weight of the negotiations with Madrid, with whom he has a cordial relationship.

Operation Pogba is underway in the Spanish capital, and other options have been moved to the back of the pile. Eriksen was the club’s favoured option but Zidane said no while Van de Beek is still seen as a risk after his breakthrough season with Ajax.