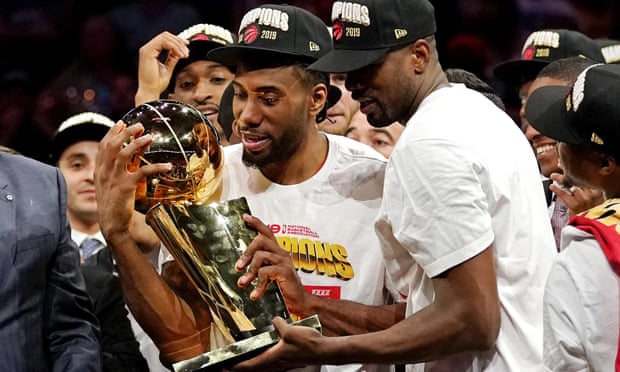 In front of a hostile Oracle Arena crowd that stood on their feet screaming from wire to wire, the Toronto Raptors made history.

The NBA’s lone Canadian team won the first NBA championship in their 24-year history, beating the Golden State Warriors, 114-110, in Game 6 of the finals on Thursday night.

The game ended in thrilling fashion. With 9.6 seconds left and the Raptors up by one, 111-110, the Raptors committed a costly turnover after Danny Green threw an errant pass to Pascal Siakam. The Warriors had a chance to win when Stephen Curry attempted a three-pointer over three defenders with 0.9 seconds left, but the ball rolled out of the rim.

In a mad scramble for possession near center court, Draymond Green attempted to call a timeout, but the Warriors didn’t have any remaining and were assessed a technical foul. The Raptors went on to make the free throw they were awarded, and two more after Kawhi Leonard was fouled just before the buzzer.

The victory wasn’t just historic. It was highly impressive given the raucous crowd in Oakland that was both trying to keep their team’s dynasty alive and honoring the Warriors’ final game ever at Oracle Arena.

The Raptors went 3-0 on the Warriors’ home court in the finals, capturing the city’s first major sports championship since the Toronto Blue Jays won a second straight World Series 26 years ago.

The game had its fair share of drama, including 18 lead changes. It also had its share of heartbreak. The Warriors, who were playing without Kevin Durant after he sustained a ruptured achilles tendon in Game 5, also went on to also lose Klay Thompson to injury.

It happened with 2:22 left in the third quarter, after Thompson was fouled hard on a dunk and fell to the floor writhing in pain, clutching his left leg. He was walked to the locker room by Jordan Bell and Jonas Jerebko. A breathless few seconds later, Thompson limped back onto the court as a shocked Oracle Arena roared at his showing of heart.

Thompson went on to make two free throws. (If he hadn’t taken those free throws, he wouldn’t have been allowed to return.) Shortly thereafter, he was ruled out for the rest of the game. He finished with a game-high 30 points on 8-for-12 shooting, including four of six three-point shots, in 32 minutes.

It was a complete team effort for the Raptors. Kyle Lowry opened the game with 11 points on 4-for-4 shooting, including making all three of his three-pointers. In the first two minutes of the game, he scored more than he did in Game 5 (10 points on 3-for-12 shooting). He finished with a 26 points, seven rebounds and 10 assists.

Pascal Siakam continues his season-long emergence into a star with a 26-point performance on 10-for-17 shooting and 10 rebounds on the biggest of basketball stages, making it hard to believe that he burst from obscurity just a short time ago.

And Kawhi Leonard, who carried the Raptors on his back throughout the playoffs, had a relatively quiet performance, finishing with 19 points on seven-for-12 shooting, six rebounds and three assists – though he was named NBA finals Most Valuable Player.

The Raptors opened the game strong, taking a quick 8-0 lead. Curry, who finished with 21 points, didn’t attempt a field goal until there was 1:25 left in the first quarter. Of course, when he finally took a shot he did it in dramatic fashion, swishing a highly contest long-range three-pointer.

The Warriors got their first lead of the game when Draymond Green made a 20-footer, to put them up, 27-26, with 2:16 left in the first quarter. From there it was nip and tuck until the death.

Draymond Green had a triple-double with 11 points, 19 rebounds and 13 assists. Two of those assists came off of dunks from Andre Iguodala, who had 22 points on nine-for-15 shooting.

Thursday marked the Warriors’ final game at Oracle Arena after a 47-year run.

But none of it mattered.

It was the Raptors’ night, and they had to earn it every second of the way.