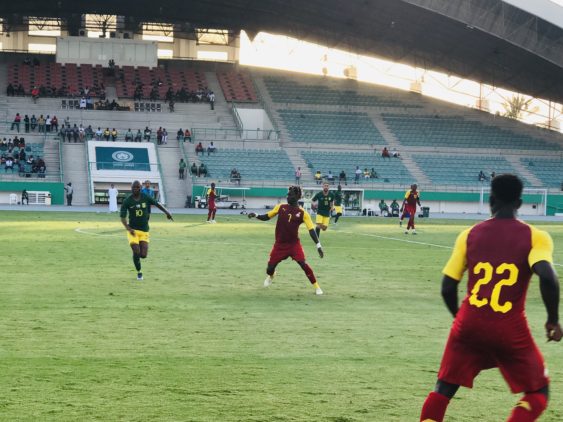 The Blacks Stars were held to a goalless draw in their training match against Bafana Bafana of South Africa played at the Police Academy Stadium in Dubai on Saturday.

Coach Kwesi Appiah’s side put up an impressive display and had a legitimate goal disallowed after the referee ruled that Jordan Ayew’s first half header did not cross the line.

The South Africans started the game strongly and forced an early save from Richard Ofori who started in post for the Black Stars.

Ghana however took control of the game within the first 10 minutes with exciting displays which nearly resulted in a goal after Thomas Agyepong’s shot was stopped by  Darren Keet.Minutes later, midfielder Thomas Partey drove in a long range shot which went wide.

Ghana however managed to get the ball into South Africa’s net after the 30th minute after Jordan Ayew headed in from the penalty box only for the match officials to rule that the ball did not cross the line.

The Black Stars maintained the momentum and dictated the game till the end of the first half.

Both teams made changes to their  sides with Samuel Owusu, Mubarak Wakaso and Kwabena Owusu coming on for Thomas Agyepong, Kwadwo Asamoah  and Christian Atsu respectively.

Asamoah Gyan was introduced into the game after the 60th minute with Baba Rahman, replacing Jordan Ayew and Lumor Agbenyenu. John Boye also handed over the captains armband to Jonathan Mensah who replaced him.

With few minutes to the end of the game, Asamoah Gyan connected in a powerful header only to be denied by the goalpost in what could have crowned the efforts of the Black Stars.

The match however ended goalless at full time after a good display from the two sides.

The Black Stars will resume training on Monday as they focus on their AFCON opener against Benin in Ismailia on June 25.

The team will leave their training base in Dubai on Friday June 21 to Egypt, four days before the match against the Squirrels.