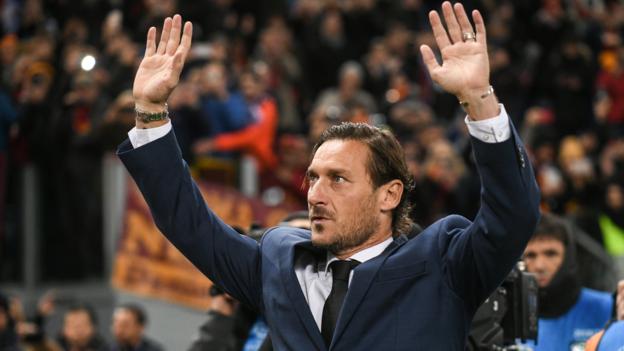 After an illustrious 30 years with his hometown club AS Roma, Francesco Totti has said goodbye. At least for now.

Joining as a youth player in 1989, Totti became the club’s all-time leader in both appearances and goals.

Upon retiring from playing in July 2017, the club legend became a director at Roma.

At a press conference this morning, Totti announced that he is leaving the only club he has ever been at.

During his press conference, Totti was brutally honest at times.

“The main focus of certain people has been to remove Romans from AS Roma,” Totti claimed at his press conference. “Since the Americans came in, they tried in every possible way to shove us to one side… It’s what they wanted and in the end, they succeeded.”

Regarding the situation with Daniele De Rossi, Totti did not hold anything back saying, “I never got involved in the De Rossi decision. I had already told some directors in September that if you think this is Daniele’s last season, tell him straight away, not like with me where you told me two rounds from the end.”

Totti also mentioned that he believed Antonio Conte was the man to transform Roma and had agreed to join the Giallorossi but then the deal fell through.

In a blistering reveal Totti said, “Did someone stab me in the back at Trigoria? Yes. I will never name names, but there are people in there who don’t want me there. These people are hurting Roma, not doing what is best for the club.”

Another scathing bomb was regarding his interactions, or lack thereof, with club chairman and majority shareholder James Pallotta.

“I spoke to Pallotta face-to-face only once, when I retired as a player. I went to London with my wife and Baldini was there. That is literally the only time we spoke face-to-face about anything.”

“Pallotta surrounded himself with the wrong people and he only listens to them. Everyone makes mistakes, but if you make the same mistakes for eight years, you have to ask yourself some questions. Something clearly is going wrong.”

“I never thought after 30 years of Roma that I’d be here saying goodbye to Roma. I never imagined it,” Totti said. “It disappoints me that I have to say this here, because I never wanted to resign.”

While likely to continue to work in football, he did not announce any specific plans for the future but Totti departs AS Roma after 30 years.