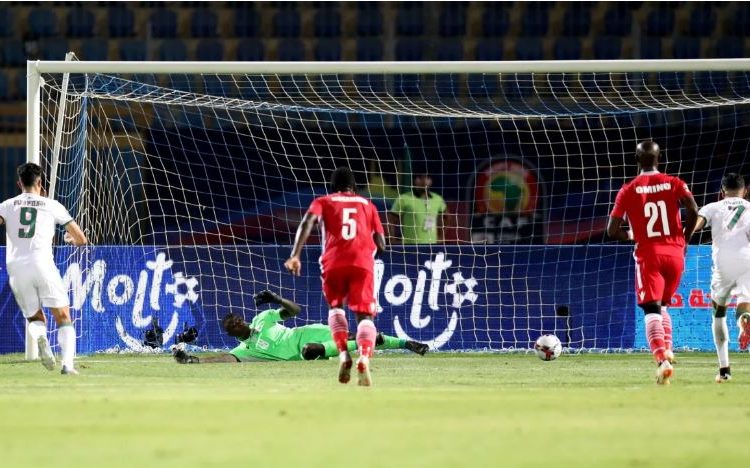 Algeria’s Les Fennecs went joint top of Group C courtesy a 2-0 victory over Kenya’s Harambee Stars at the June 30 Stadium in Cairo on Sunday. The victory took Algeria joint top with Senegal who mirrored the same result against Tanzania in the early kick off at the same venue.

A Baghdad Bounedjah penalty and Riyad Mahrez’s deflected strike handed Algeria victory courtesy of a well choreographed first half performance. Kenya came back a better side in the second half, but didn’t have enough in their vaults to fight for victory.

Algeria was the better side the entire first half forcing Kenya to play in their own half and were limited to only two efforts at goal, both going wide.

Bounedjah had shown his potent as early as the second minute of the game when he raced onto a long pass inside the box but his shot on the volley went over. In the 13th minute, Bounedjah was axed at the edge of the box by Abud Omar.

Mahrez stepped over the resultant freekick and his effort went inches wide. Algeria came close in the 24th minute when Kenya keeper Patrick Matasi spilled Youcef Bellaili’s shot after he was played through by Sofiane Feghouli.
Four minutes later, Mahrez had another effort with a freekick from range that went agonizingly wide with keeper Matasi found flat footed.

The Algerians were finally rewarded for their pressure after 32 minutes off the penalty spot after Dennis Odhiambo axed Youcef Atal inside the box. Bounedjah stepped forward and made no mistake from 12 yards out.

Kenya’s chances at goal came late in the first half with Ayub Timbe and Eric Johannah trying shots from the right, both going wide. Bounedjah could have doubled the tally three minutes to the break but is header after Matasi missed the ball off his line was over.

Algeria though went to the break 2-0 up when Mahrez’s shot from inside the box was deflected by Omar, taking it away from his keeper Matasi.

In the second half, Kenya was better and limited Algeria from playing the ball. The change to bring out Francis Kahata for Erick Ouma proved decisive for Sebastien Migne’s boys, but scoring was a problem.The Harambee Stars next play Tanzania in the East Africa derby next Thursday while Algeria face Senegal.